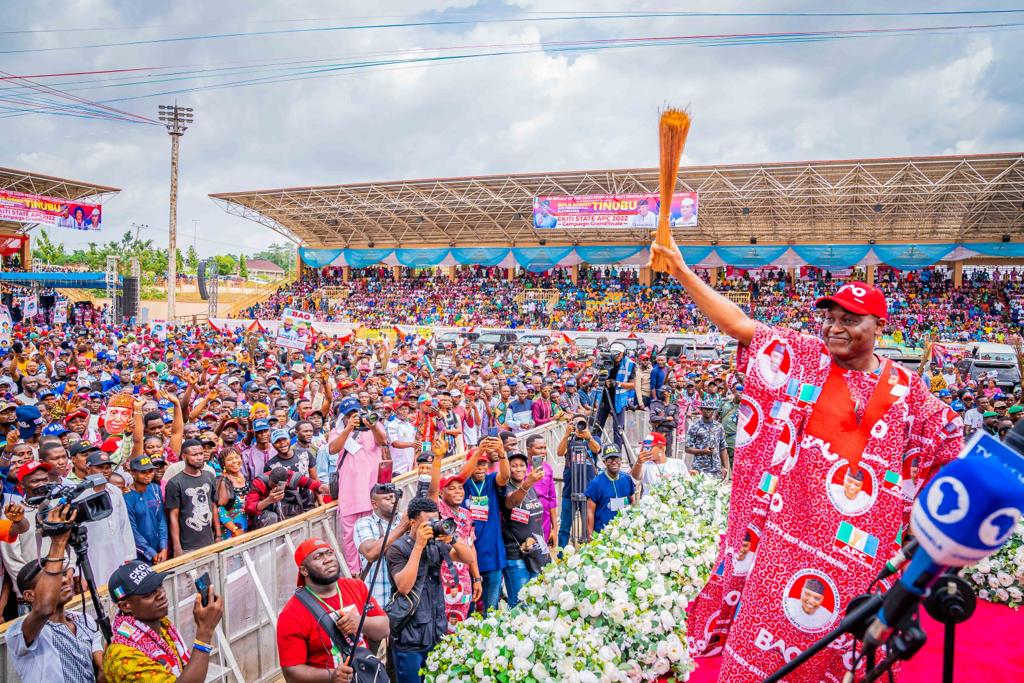 Posted By: The Gazelle NewsIn: News, PoliticsNo Comments
Print Email
The presidential candidate of the All Progressives Congress (APC), Asiwaju Bola Ahmed Tinubu, has said the party is united to ensure victory for its governorship candidate, Mr Biodun Abayomi Oyebanji, during Saturday’s election in the state.
Asiwaju Tinubu said all quarrels and squabbles in the APC family had been resolved and the party is approaching Saturday’s governorship poll and next year’s general elections as a united house that is ready to crush the opposition. 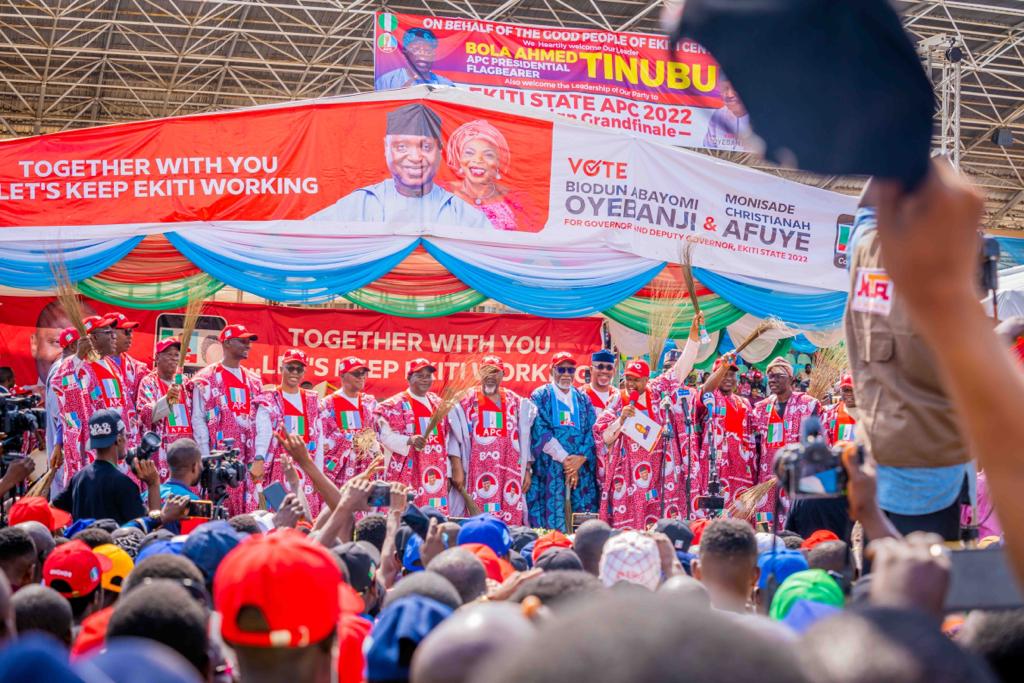 Speaking in Ado- Ekiti,  Tuesday at the APC mega rally held ahead of the June 18 governorship election, Asiwaju Tinubu, who represented President Muhammadu Buhari, said the Ekiti poll is an opportunity to make a statement that the Yoruba is ready for the Presidency next year.
The entry of Asiwaju Tinubu into the arena at 1.40 pm enlivened the crowd who greeted the presidential candidate with deafening ovation and applause to the admiration of the guests.
The APC National Chairman, Senator Abdullahi Adamu, who led other members of the National Working Committee (NWC) to the rally, presented the governorship flag to Oyebanji who was joined by his running mate, Chief (Mrs.) Monisade Afuye and the wife of the candidate, Dr. Olayemi Oyebanji. 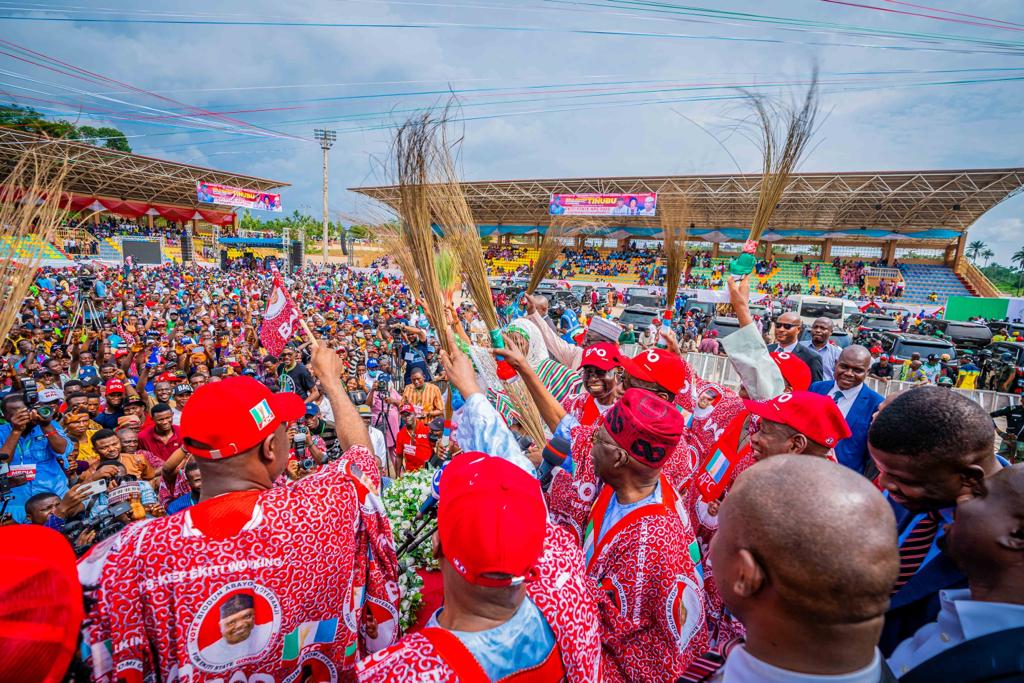 The rally which was witnessed by a mammoth crowd was attended by all APC  Governors: Atiku Bagudu (Kebbi), Babagana Zulum (Borno), Nasir El-Rufai (Kaduna), Abdullahi Sule (Nasarawa), Inuwa Yahaya (Gombe), Simon Lalong (Plateau), Abdulrahman Abdulrazaq (Kwara), Abdullahi Ganduje (Kano), Abubakar Badaru (Jigawa), Rotimi Akeredolu (Ondo), Gboyega Oyetola (Osun), Dapo Abiodun (Ogun) and Babajide Sanwo-Olu (Lagos) who were all introduced by the host Governor, Dr. Kayode Fayemi.
Asiwaju Tinubu, who had arrived the state on Monday, had prior to the rally, presented Oyebanji to the Ewi of Ado Ekiti, HRM Oba Rufus Adeyemo Adejugbe,  during a courtesy visit to the palace. in company with Dr Fayemi, Oyebanji and other APC leaders.
He told the crowd pf supporters that President Buhari asked him to bring the message of newfound love, stability, oneness and unity in the party to its members and electorate in Ekiti to achieve total victory on Saturday and general elections in 2023.
Going down the memory lane, Asiwaju Tinubu recalled the developments that led to the formation of the APC in 2013 with the merger of legacy parties which successfully dislodged the People’s Democratic Party (PDP) which he described as “Poverty Development Party” from power at the 2015 general elections.
The presidential flag bearer said Nigerians further trusted the party by re-electing it to continue in power in the 2019 general elections commending Buhari for supporting the clamour for return of power to the South in 2023 with him (Tinubu) as the symbol for the unity of the country.
The former Lagos State Governor threw his weight behind the election of Oyebanji noting that internal rancour within the party has now become a thing of the past and it is now united to achieve victory on Saturday to signpost its readiness to retain power at the centre in 2023.
Asiwaju Tinubu urged Ekiti Kete to re-elect APC to show their readiness to support the party that has entrusted its presidential ticket to a Yoruba candidate next year urging them to forget the grievances of the past and support the party in elections ahead.
He said: “President Buhari is a man of integrity, honour is better than riches. He has said we (APC) are going back to South for the next President of Nigeria and he has kept that promise for us and it is now left for us to work for the progress and unity of Nigeria.
“There is no house where we don’t have quarrels, democracy is full of twists and turns, hills and valleys. We will have quarrels but we will not burn down the house. I am a builder, a successful builder for that matter.
“Those of us that said we are fighting, you are lying. We have settled our quarrel. This is the first step in the elections ahead. The President has said I should be involved in this (Ekiti) election and we are going to succeed.
“I have not failed in any elections before; four years ago, myself, (Governor) Bagudu and others were here and you listened the us and we succeeded in that election.”
Speaking earlier, the National Chairman, Senator Adamu said the Ekiti rally was the first outing of the party since the conclusion of the national convention which produced Asiwaju Tinubu as the presidential flag bearer.
The former Nasarawa State Governor who was impressed by the huge crowd that thronged the rally assuring that Oyebanji would succeed Dr Fayemi as the next Ekiti Governor.
The National Chairman urged voters in Ekiti to vote Oyebanji whom he described as humble and service inclined candidate to prove a point that Ekiti is an APC state.
He said: “This Saturday will be historic and we thank Ekiti people for coming out en masse to welcome us. I have come to this state three times, I have not seen a crowd like this.
“We saw the vote returned during the election of Governor Fayemi but next Saturday, we want to see the double of that. Come out on Saturday and show all that Ekiti is an APC state.”
The former Interim National Chairman of the party, Chief Bisi Akande, urged those who are still aggrieved with APC to forgive the party ahead of the Saturday election.
Giving a word of admonition to the party faithful and the electorate in the state, Chief Akande who spoke in Yoruba said to err is human and to forgive is divine urging the aggrieved to forgive the party, it’s candidate and whoever that might have offended them.
The Chairman of the National Campaign Council for Ekiti governorship election and Kebbi Governor Bagudu urged voters in Ekiti to retain APC in power for good governance to continue in the state
Governor Bagudu said he and other fellow governors had visited the state within the last four years to commission key projects and witnessed the launch of the Rice Pyramid in Ekiti noting that the state must remain in the APC fold for such laudable policies and projects to continue.
The rally was a big carnival that attracted APC members from all the 16 local government areas who wore colourful attires with Oyebanji’s portraits as a mark of solidarity.
Ace Fuji musician King Wasiu Ayinde Marshal and other artistes entertained the crowd during the rally.