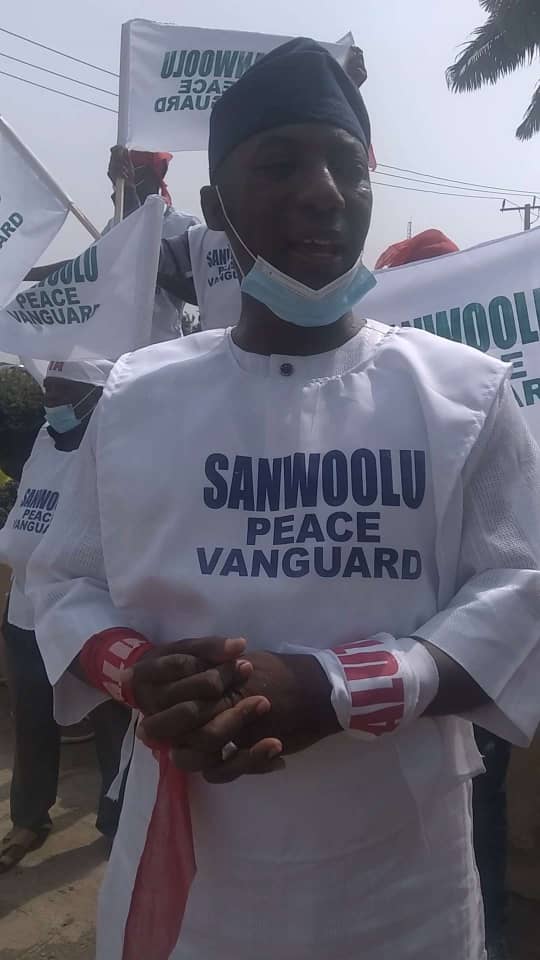 Posted By: The Gazelle NewsIn: NewsNo Comments
Print Email
It appears the last has not been heard of the #EndSARS protest of October 2020 that shook the country, especially, Lagos State to its foundation as a group of right activists have concluded arrangement to take a legal action over what they view as character assassination.
Making this disclosure in Lagos was the renowned human right activist and public commentator, Comrade Razaq Olokoba at a press conference organized by a coalition of Civil Society Organizations (CSOs), to support the cancellation of the Walk for Peace by Governor Babajide Olusola Sanwo-Olu of Lagos.
Olokoba, who is the National President of the Campaign for Dignity in Governance (CDG), led over 70 other right groups and pro-democracy organizations to the press conference vowed that his colleagues would go to court to challenge the allegation of violence levelled against them by one Mr. Kunle Ajayi, who claimed to be the Chairman of a group known as the African Action Congress (AAC).
The aggrieved CDG boss said going to court to clear their names was necessary because describing people of impeccable character like him, Comrades Razaq Olokoba and Debo Adeniran of the Coalition Against Corrupt Leaders (CACOL), as part of the street urchins that allegedly attacked the #EnSARS protesters last year was the height of malady.
Olokoba was recalling a press conference addressed by Mr. Ajayi, alleging that, “the hoodlums’ attack during the #EndSARS protests were led by an aide to Governor Babajide Sanwo-Olu, Anthony Adeyinka Adeboye, also known as Zulu Authority,” mentioning other names like Razaq Olokoba, Debo Adeniran, Nelson Ekujumi, Gbenga Soloki and others as part of the accomplices that took part in the alleged attack.
While saying all the names mentioned by Ajayi are known civilised activists who have been in the activism for over 30 years even when they were teenagers in secondary schools where they have fought for people’s right responsibly, peacefully and with high standard of civilization, Olokoba said they have no record of violence or breach of the peace.
He added that it is on record till date that, those names lobbed with hoodlums are the very group that are familiar faces on television and voices on radio daily discussing the state of the nation and proffering solutions with the aim of fostering social peace, political stability and religious harmony in Lagos State in particular and Nigeria as a whole.
Concluding, the youth leader assured that all those involved in the character assassination would hear “from our team of lawyers in due course,” saying the next thing on the matter is meeting in court.
Present at the press conference with their members were, Comrades Razaq Olokoba of the CDG, that addressed the conference, Comrades Soyoye Ekundayo (Progressive Volunteers), Prince Dare Aladekoba (Royal Peoples Platform), Adekunle Akinde (Youth Advocacy Initiative), Ekundayo Ibrahim (Egbe Omoluabi Eko), Eyitope Success-Adekunle (Women for Change Initiative), and CDG Co-Convener Titi Akosa.
Others included but not limited to JamesAdeyemi (Black Youth Vanguard), Adewale Oladipupo (Epe Youth Forum), Omolola Olukayode (Nigeria Peace Advocacy Group), Adeosun Adekunle (Egbe Omo Yoruba Ronu), Omobanke Razak (Labour & Workers Welfare Advocacy Centre) and Adebayo Oyenekan of the Congress of Progressive Youth.