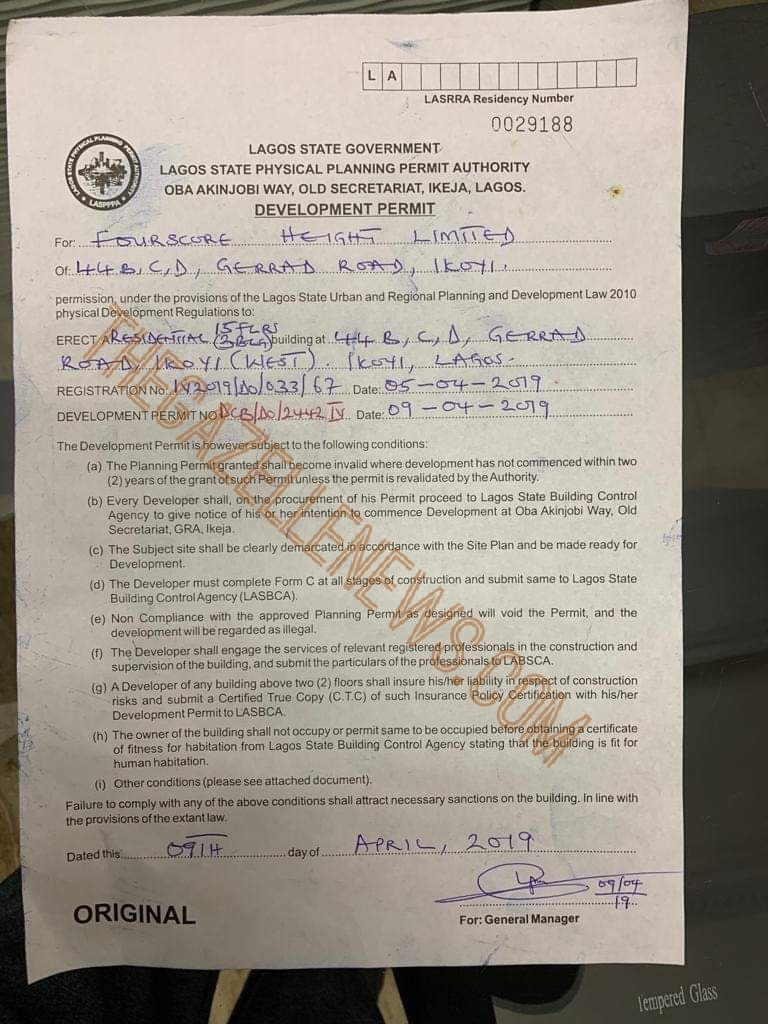 Posted By: The Gazelle NewsIn: Investigations, News, PropertyNo Comments
Print Email
Documents in possession of The Gazelle News.com have confirmed that only 15 floor was approved for the 21-storey building which collapsed on Monday, 1 November, 2021.
This confirmed the earlier statement made by suspended General Manager of the Lagos State Building Control Agency (LSABCA), Mr. Gbolahan Oki that the owner of the building got approval for 15 floor.
In the document in the possession of this medium, it was discovered that the state Physical Planning Permit Authority issued the approval.
The document confirmed that the approval for 15 floor, three blocks of buildings was issued to Fourscore Height Limited of 44b,c,d Gerard Road, Southwest Ikoyi on 9 April, 2019.
The approval was given for construction of the buildings meant for residential purpose. The buildings address was 44b,c,d Gerard Road, Southwest Ikoyi.
The registration number for the approval was 1v2019/DO/033/67 issued on 5 April, 2019 while the Development Permit Number issued on 9 April, 2019 was DCB/DO/2442 IV.
Investigations by this medium revealed that the suspended GM only resumed in the agency two months ago and that it was the current Permanent Secretary in the state Ministry of Physical Planning and Urban Development who served as the DG of LASBCA when the approval was given.
It was also discovered that Governor Babajide Sanwo-Olu had earlier ordered that the buildings be sealed off and this was done for four months. Thus, there is need for government and indeed, the investigative panel to uncover who authorised the Re-opening of the building construction.
The question on the lips of many is who really is promoting Fourscore Height.
Unconfirmed reports revealed that the file for the project was taken away by the current PS when she was promoted and redeployed form LASBCA.
There are also allegations that no due diligence was conducted on why the original structural engineers resigned and pull out from the project.
All these and more are some of the posers and riddles for the proposed investigative panel will solved when they assumed duty.

EFCC Reaffirms Commitment To Its Mandate