APC LOGO
Share
Facebook Twitter LinkedIn Pinterest Email
The Governor’s Advisory Council (GAC) which took place on Friday, 21 May, 2021 at Ikoyi was one of the longest in the history of the Council which is the highest decision making body in Lagos politics.
The Gazelle News.com learnt exclusively that the deliberated for about five or six hours in what a member described as a ‘very stormy session’.
At the centre of the stormy session was the coming local government elections in the state which has been fixed for Saturday, 24 July, 2021.
With the Lagos State Independent Electoral Commission (LASIEC) giving the political parties the go ahead on preparations for the council polls, political activities have been geared up in the state.
Expectedly, the ruling All Progressives Congress (APC) have been enjoying all the attention and with the state chapter of the party throwing open the process for the nomination of the party’s candidates for the election, party members have trooped out in high number to collect the nomination forms.
As at the time the nomination closed, a total of 333 aspirants have collected forms to vie for the chairmanship tickets in 57 councils. This is unprecedented in the history of the party, made more remarkable by the fact that the aspirants, except women and youth, paid N2 million each for nomination form.
As expected, prominent politicians have been jostling for control of the councils especially with the general elections coming in less than two years from now.
At the meeting preceeding the Friday’s edition, GAC has ordered that the aspirants will all go through direct primaries involving all party members. The Council has stated categorically that all aspirants, including incumbents, must face the party members at the direct primaries. This decision served as the spur for aspirants and they bought the nomination forms in high number based on their conviction that a free and fair primary exercise would be conducted.
However, things started taking different dimensions with particular group allegedly spearheaded by the Speaker of the State House of Assembly, Rt. Hon. Mudashiru Obasa telling others that they have the mandate of Asiwaju Tinubu to select preffered candidates for the election.
To drive home this assertion, a meeting was alleged to have been held at the Joel Ogunnaike official residence of the Speaker on Monday, 17 May, 2021.
The meeting, The Gazelle News.com learnt, was held to fine tune the list of preferred chairmanship candidates for the election.
The meeting allegedly had in attendance the following prominent political figures in Lagos: the Speaker who chaired the meeting, Cardinal James Odunmbaku, Oyinlomo Danmole, Bashorun Sikiru Alabi Macfoy, Honourable Taofeek Adeyemi Alli, and Pastor Cornelius Oyefolu Ojelabi among others.
The meeting deliberated on the council election and came up with their preferred candidates for most of the 57 councils anchoring thier choice on having the approval of Asiwaju on the assignment.
The list of preferred candidates written with Green pen against each of the council brought up some controversies. The lists in possession of The Gazelle News.com, are displayed in this story. 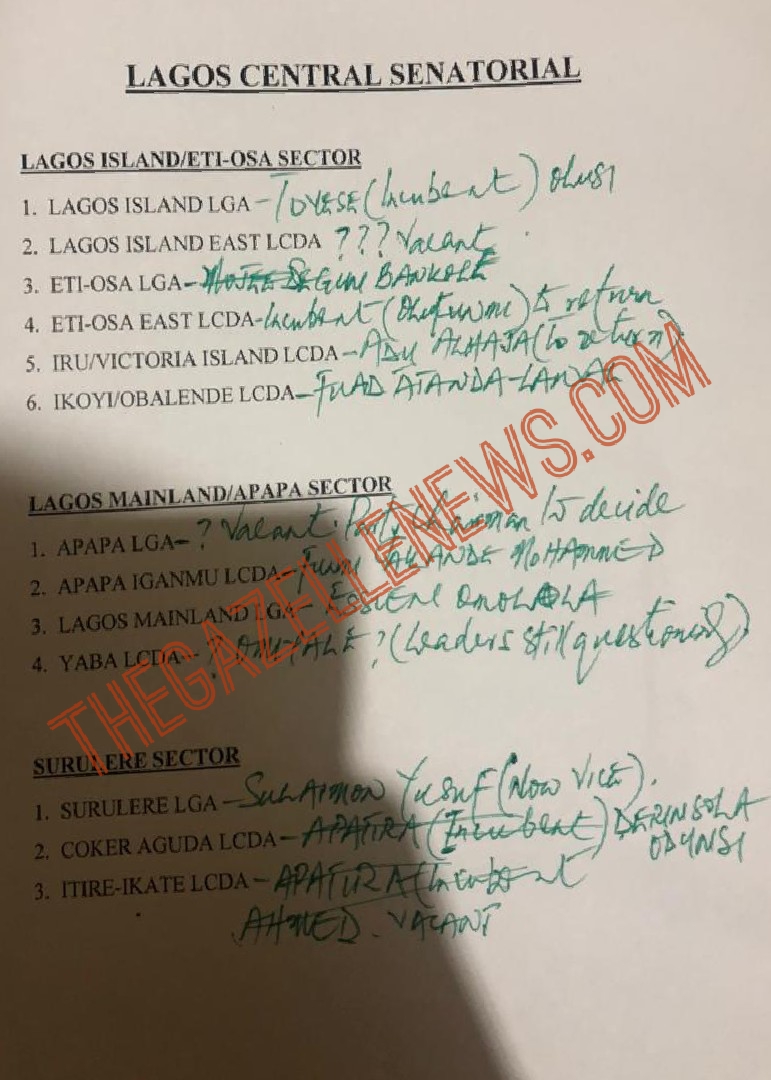 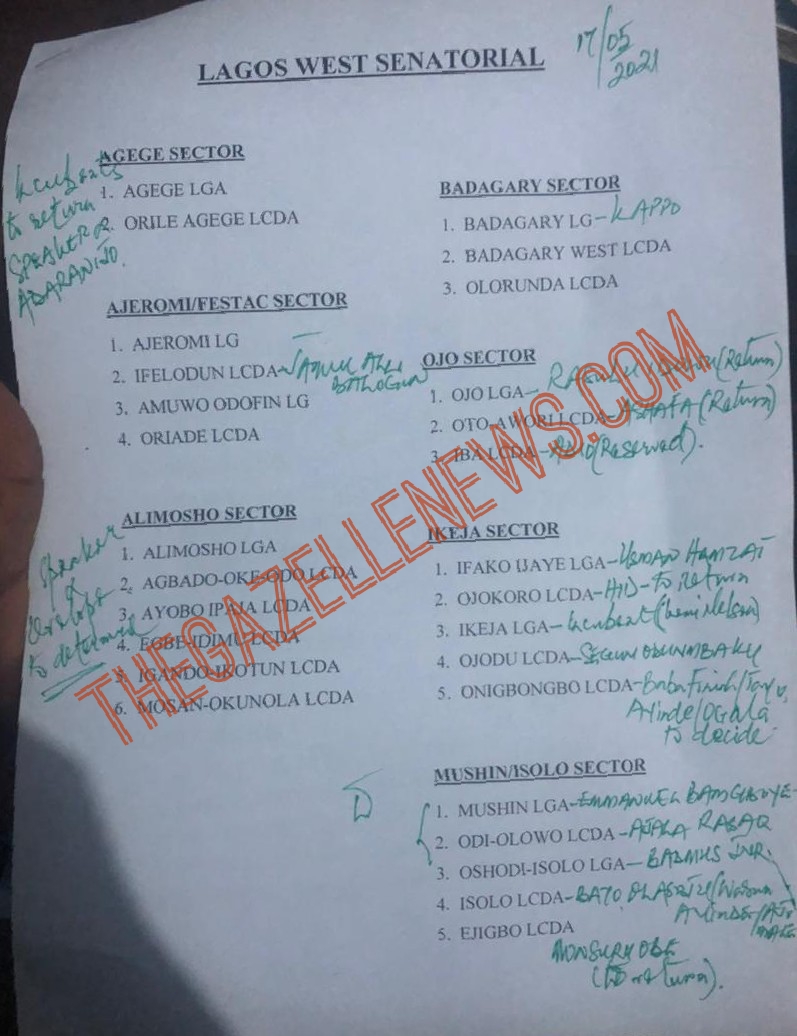 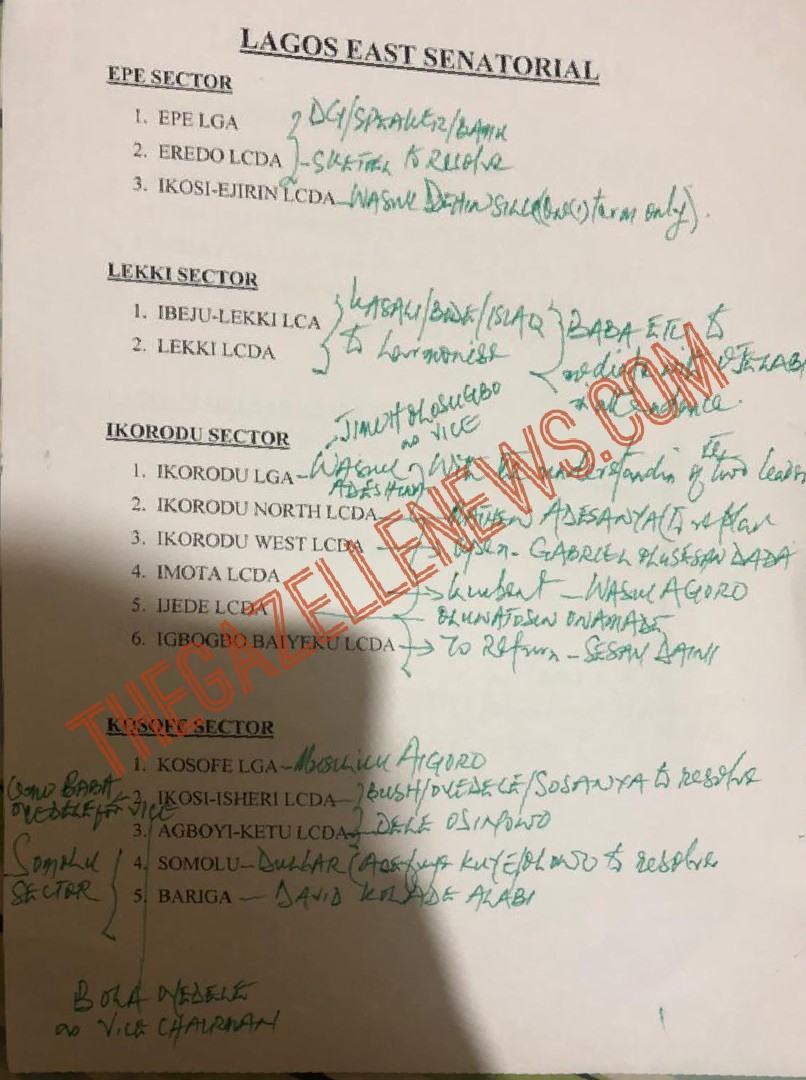 For instance in Agege, of course the incumbent is a political son of the Speaker so it was no surprise that ‘incumbent to return’ was written beside the council. In Orile Agege, ‘Speaker and Adaranijo’ to decide. Adaranijo being the predecessor of the incumbent but not on good terms with him.
In Otto Awori, the incumbent was deemed to return. Not also a surprise as this has been the campaign of Pastor Ojelabi all along. Let’s inform our readers that Azeez, current Vice Chairman of the Council is Ojelabi’s boy. In Ojodu, Segun Odunmbaku is deemed as the preffered candidate, also not a surprise since his father, Cardinal Odunmbaku aka Baba Eto was at the meeting. Let’s also remind our readers that Cardinal Odunmbaku’s first child and daughter, Mrs Funke Adepoju is the current Executive Secretary of the Lagos State Water Regulatory Commission while Funke’s husband had earlier served as a Sole Administrator of one of the councils in the state between 2016 and 2017.
For Isolo LCDA, Bayo Olasoju was picked as the preferred candidate. Bayo is Band Manager to fuji musician, Wasiu Ayinde K1 the Ultimate, a close friend of the Speaker. Bayo is the Vice Chairman of the outgoing administration in the Isolo and staff and management of the council can count the number of times he came to the council or participated in the council activities on their fingers. Yet he is the preffered candidate.
The most surprising decision was the six councils in Alimoso Federal Constituency. Written conspicuously against the six councils is ‘Speaker and Orelope-Adefulire to determine’.
It was based on these lists which have been circulated among political leaders in the state that the stage was set for the stormy session of the GAC that took place on Friday, 21 May, 2021.
The Speaker was allegedly tackled on what someone described as ‘overbearing’ attitude.
According to report, the Senator representing Lagos West Senatorial District, Senator Solomon Olamilekan Adeola, particularly urged the Council to call the Speaker to other saying he and his group have been dropping the name of Asiwaju Tinubu among party members.
A former Deputy Governor was also reported to have spoken in the same vein while an elder of the party was alleged to have asked Asiwaju Tinubu to call the Speaker to order on the matter.
The Gazelle News.com learnt that it was the stormy session at the meeting that prompted Asiwaju to issue a press statement affirming that he has no preffered candidates among the aspirants. Asiwaju reiterated the party’s stand that where no consensus has been reached, a primary election should be held.
GAC also reiterated its earlier order that a direct primary election be held in councils where consensus have not been reached.
The GAC was supposed to meet again on Tuesday, 25 May, 2021 but as at the time of writing this, there were no indications that the meeting took place.
The Gazelle News.com will continue to serve inside details of the meeting as events occurred, just keep on logging to our website and follow us on all our social media handles.
Meanwhile, the stage is set for mother of all primary battle on Saturday, 29 May, 2021 as the party Electoral Committee has released the primary election programmes.