By The Gazelle NewsJuly 6, 2022No Comments1 Min Read 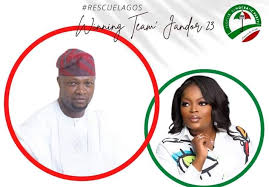 Share
Facebook Twitter LinkedIn Pinterest Email
Popular Nollywood actress, Funke Akindele, popularly known and called ‘Jenifa’ is the Deputy Governorship Candidate of the People’s Democratic Party (PDP) in Lagos State, thegazellenews.com can exclusively revealed.
This medium confirmed exclusively from multiple sources close to the party’s Governorship Candidate in the state, Dr Abdul Azeez Olajide Adediran aka Jandor and leadership of the party in the state.
The gazellenews.com learnt further that the official presentation of Akindele would be made public very soon.
Our correspondent learnt that four major reasons were responsible for her choice as for the covered position.
“She is from Ikorodu and Lagos East Senatorial District like the incumbent Deputy Governor.
“She is also from the royal family in the town,” sources told thegazellenews.com.
This medium learnt further that Funke Akindele’s mother is the immediate younger sister of the current Ayangbunren of Ikorodu, His Royal Majesty Kabiru Shotobi. “Her mother is the immediate younger sister of the monarch, same parents,” our sources said.
Funke was also picked because of her gender as well as her youth. “She’s a female, and she is very young. We’re both gender and youth sensitive in our party,” thegazellenews.com was told.
Finally, her popularity among her colleagues in the movie industry was also an added advantage.