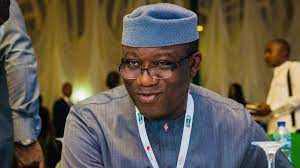 Posted By: The Gazelle NewsIn: NewsNo Comments
Print Email
Ekiti State Governor, Dr Kayode Fayemi has advocated the review of salaries and allowances of judicial officers in the country, urging the National Judicial Council (NJC) to renew negotiation for upward review of judicial officers’ salary as part of the agitation for judicial autonomy.
Dr Fayemi stated this during the swearing in of Justice John Adeyeye as  acting Chief Judge of EKiti State, in Ado Ekiti on Monday, 31 May, 2021.
The Governor  observed that judicial officers in the country have been on same salary structure for over a decade, even while  other categories of public servants have had theirs reviewed .
Dr Fayemi at the event, also also spoke on the  negative consequences of Covid 19, Endsars, and JUSUN Strikes and urged the new acting Chief Judge to develop practical solutions that would sustain the wheels of justice even in the face of lockdowns or strike actions.
“I am aware that between 1999 till date, the Federal Government reviewed the salaries and allowances of Public Servants  specifically in 2000, 2005, 2007 and 2011. However the salaries of judicial officers were only reviewed twice during the same period.
“As a result judicial officers have been on the same salary structure for more than 10 years. It may now be necessary for the NJC to provide leadership on possible renewed negotiation on this issue as part of a holistic discussion on judicial autonomy.
“The frequency of closure of our courts constitutes threat to the security of this state. It is for this reason that I respectfully urged your lordship to enable practical solutions to ensure that the wheels of justice in our state continues to turn even during lockdowns of strike actions.” He said.
He also expressed concern on the shortage of female judges on the bench, adding that a gender diversified judiciary would positively shape the development of law in the State.
The Governor  called on the Judiciary  to support and strengthen the capacity of the Nigeria Police and the Ministry of Justice in the State to deal with all forms of sexual violence by reviewing rules and court procedures to ensure speedy prosecution of sexual violence matters.
Dr Fayemi who stressed that his administration was conscious of the benefit of an effective judicial system to the socio-political growth and development of the State, charged the new acting chief judge to key into his mission to a provide fair and equal access to justice system irrespective of gender, ethnic origin, economic status and other social indices.
Justice Adeyeye in his acceptance speech, pledged to uphold the oath of office which he swore to and promised to work with all stakeholders in the justice sector of the state to enhance speedy dispensation of justice that defines the 21st century judiciary.
He pledge to bring about a paradigm shift from the conventional mode of dispensing justice through the application of technology in the recording of court proceedings to enhance administration of justice in the State.
Justice Adeyeye who replaced the immediate past Chief Judge, Justice Ayodeji Daramola, solicited for the supports of judicial officers with a promised to prioritize their welfare.
The acting chief Judge was born 1960 in Araromi Ugbesi in Ekiti East Local Government of Ekiti State and was called to bar in 1986 He started his career as a State counsel in the Civil service of the old Ondo State before joining the Ekiti State Judiciary Service Commission shortly after the creation of the State in 1996. He got elevated to the position of a judge in the Ekiti State high court in 2002 and has served at different time in the election petition tribunals.