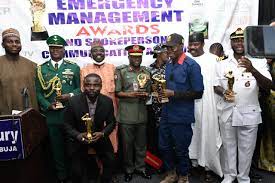 Some gallant officers of the Nigerian military, the Police and civil defence were among the award recipients at the 3rd edition of the Security and Emergency Management Awards (SAEMA 2021).

The officers received different categories of awards for demonstrating gallantry and doggedness in the fight against terrorism, banditry and kidnapping, among others.

Lieutenant Colonel Ponfa Andrew Wuyep of the Nigerian Army bagged the “Military Officer of the Year” award for leading his troop on successful counter-insurgency operations in Maiduguri and its environs.

Inspector Abimaje Isaiah of the Nigerian Security and Civil Defence Corps (NSCDC) won the “Security Officer of the Year” for single-handedly apprehending scores of kidnappers along Abuja -Kaduna Highway.

Flight lieutenant Abayomi Dairo bagged gallantry award for shelling bandits’ camps in the North-west before his aircraft came under heavy fire by bandits. He successfully ejected from the aircraft and navigate to safety.

Saminu Audu, a Commander of the Civilian Joint Task Force (CJTF) Maiduguri, received the “Volunteer Group” Award for collaborating with the Nigerian troops in the arrests of informants and elimination of scores of ISWAP/Boko Haram terrorists.

Other awardees at the event included ASP Mariam Yusuf of the Nigeria Police who won the “Crisis Communicator” award; Mrs Abimbola Animashawun of the Nigerian Customs Services, NCS as “Law Enforcement Officer of the Year” and Sifon Essien of TVC as the Humanitarian Journalist of the Year.

Others are the National Institute for Security Studies (NISS) for Training Institute, Lagos Command of Economic and Financial Crimes Commission (EFCC) for Cybercrime Prevention and National Commission for Refugees for Humanitarian Services.

In his remarks, Mallam Yushau Shuaib, the Chief Executive Officer of Image Merchants said SAEMA event, an initiative of Emergency Digest was instituted in 2019 to recognize and appreciate the invaluable contribution to the security, peace and development of Nigeria by the personnel in the Nigerian military, security, intelligence and response agencies.

FG To Step Up Awareness On Food Security