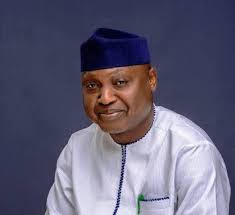 Share
Facebook Twitter LinkedIn Pinterest Email
Ekiti State Governor, Mr Biodun Oyebanji has reiterated the commitment of his administration towards ensuring that all roads in the state are motorable as an impetus to economic development of the state.
Governor Oyebanji stated this in Ado-Ekiti on Thursday, 24 November, 2022, when he and some top officials inspected some township road rehabilitation projects in Ado- Ekiti.
He said his government was determined in ensuring that Ekiti people enjoy the dividends of democracy in every way possible.
The inspection took the team from Odo-Ado to Atikankan to Isato Oke where the Governor assured the people that they would surely feel the positive impact of government in the coming years.
While appealing for the continuous prayers and cooperation of the people of the state with his government, Oyebanji assured Ekiti citizens that they will soon begin to see the implementation of the various programmes that would lift their lives including provision of structures for business development in the state.
“From my first day in office, we decided that we have to fill all the pot holes and rehabilitate the roads, it’s the first phase in the state-wide operation to ensure that we have motorable roads throughout the state but we are starting with Ado because it is the state capital.  And by next year we’ll move to other parts of the state just to ensure that passengers and commuters move freely in Ekiti state. It is part of our agenda to make life easy, comfortable and to provide a structure for business development in the state.
“My message to Ekiti people is to ask for their continuous prayers and cooperation with the government and to expect to see more of this in the coming year. We campaigned on six pillars and they will see the implementation of those programmes as soon as the House of Assembly returned the budget to the executive”.
The Governor said.
The inspection team included the Secretary to the State Government, Dr (Mrs) Habibat Adubiaro, Head of Service, Barrister Bamidele Agbede and other state officials.
Meanwhile, the Governor, who stopped by at APC Ward 11 meeting at Isato assured the residents of the state that his government would not take the positive contribution of party leaders for granted with the assurance that their welfare would be adequately taking care of.
He appealed to politicians to live peacefully with one another, reassuring them that political appointees in his government would be those chosen by the party leaders at the ward level to represent them.