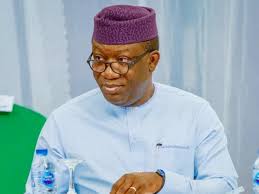 Governors Will Back NPC For Successful 2022 Census

Posted By: The Gazelle NewsIn: News, PoliticsNo Comments
Print Email
Ekiti State Governor and Chairman Nigeria Governors Forum (NGF), Dr Kayode Fayemi has restated the readiness of government at the sub-national level to support the conduct of 2022 national population census, describing the exercise as vital to the socio-economic index of the country.
Dr Fayemi stated this on Monday, 6 December, 2021 when the Chairman of the National Population Commission (NPC), Alhaji Nasir Isa Kwarra led Southwest Federal Commissioners and some principal officers in the commission on advocacy visit to the Governor’s office in Ado Ekiti.
The Governor maintained that the exercise is of utmost priority to the Governors and would be given needed assistance to ensure that the process is conducted scientifically to avoid manipulation and human error.
Dr Fayemi, assured the chairman of the commission, of the support of his  governor colleagues in the area of sensitization, mobilization, provision of security, accommodation and logistics for effective deployment of personnel across the State.
Expressing confidence in the ability of the commission to conduct the exercise effectively and efficiently, Dr Fayemi said judging from the preparatory work that has gone into many states, it was apparent “we are going to witness a new dawn in relation to this assignment.”
“Let me say this on behalf of all my colleagues in the Governors forum that this is a matter of interest to us and it is not one that we would like to see subjected to the usual tales of how well you behaved in your state should determine the figures that comes up, this should be a scientific exercise in every way possible.
“As per the other issues you raised, sensitization, mobilization, provision of security, accommodation logistics for effective deployment of your personnel, I believe all of the governors would be interested in assisting as much as possible in all of these areas because for us this is an assignment that we take very seriously and it is one that is in the overall interest of our country.
“We brandish figures around too much in this country, nothing concretes, even countries that are bigger than us, that are more complex than us do hold their population census routinely, so there is no reason we should not be able to do this as a matter of course in Nigeria and I know that the President would be very supportive of this assignment as we all will be at our own level at the subnational level.
” Whatever you think we have to do to accomplish this task we are here, we will do it. He added.
Earlier, the NPC Chairman, Alhaji Nasir Isa Kwarra who commended Governor Fayemi’s astuteness in  conducting  affairs of NGF, requested him to help rally support of his colleagues in the Governors forum for the census exercise in 2022.
He disclosed that the commission had started the second pretest across selected local governments in the country of which three local governments, namely Efon, Ekiti West and Ilejemeje were selected in the state to increase public awareness and get the mind of the people prepared for the forth coming census exercise.
Alhaji Kwarra revealed that the 2022 census would be conducted with the aid of electronic devices to reduce human errors and chances of manipulations and that census instruments and methodology are being deployed in the second pre-test exercise to prove their viability and give room for improvement.
He also applauded the Governor for providing motorcycles and other logistics for the commission, noting that they have been of immense support to the commission’s field officers.