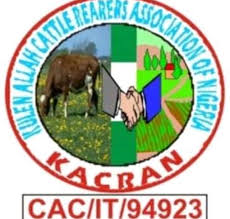 Posted By: The Gazelle NewsIn: NewsNo Comments
Print Email
One of the prominent herders association in the country, Kulen Allah Cattle Rearers Association of Nigeria (KACRAN) has called for the enforcement of President Muhammadu Buhari’s directive on encroached grazing reserves and cattle routes.
At the peak of the crisis between herders and farmers on invasion of cattle on farmlands, the President has said he was going to ensure that identify grading reserves and cattle routes are going to be recovered.
A statement on Tuesday, 12 April, 2022, by the National President of KACRAN, Hon Khalil Bello, appealed to the Minister of Justice, Abubakar Malami to enforce the President’s directive on recovery of encroached grazing reserves and cattle routes.
The statement read: “Nigerians may recall the widely publicized  directive of President Muhammad Buhari to the   Attorney General of the Federation and Minister of Justice, Hon Abubakar Malami SAN to in the interest of peace and unity in the country take all necessary measures to reclaim the entire  encroached grazing reserves and cattle routes especially in the northern part.”
Bello lamented that: “For nearly a year after the directive, no action has unfortunately been taken by the Office of the Honourable Attorney General to enforce the  President’s directive.”
He said: “We, the members of Kulen Allah Cattle Rearers Association of Nigeria (KACRAN) with all sincerity of purpose wish to passionately appeal to the Office of the nation’s Attorney General to as a matter of utmost urgency to execute the directive towards the achievement of durable peace and sustainable development.”
He added that; “Our appeal is based on the following genuine reasons: For Mr. President to be seen true to his words and a genuinely committed leader to issues and peace, national reconstruction and socioeconomic advancement;
“The farmers who due to their selfish interest and total negligence to our national security would reason to desist from what will jeopardize our national bond;
“The rains are almost here and there would be need to avert further violent conflicts.”
Bello said: “There is need that all gazetted grazing reserves and cattle routes are liberated from  encroachment by sedentary farmers who forcefully convert these cattle routes and grazing reserves into farmlands causing additional insecurity problem in the country by bringing direct collision between sedentary farmers and herders.
“The encroached grazing reserves and routes are legal and constitutionally owned by herders and the President’s directive for their reclaiming hence farmers may plant their crops in the area under discussion and induce direct herders and farmers clash.”
He lamented that; “Even now, the Northern part of this Country is sadly faced with serious issue of insecurity which is mainly centered around the ongoing mistrust between our beloved Farmers and Herders.”
He insisted that: “The enforcement of the said historic and very important order will reduce, if not completely end the wanton clashes between Cattle Rearer  and Farmers that is  mainly caused by the Farmers accusation that Herders destroy their farms while the Herders on their side are blaming Farmers for encraoching into their grazing reserves or totally blocked their cattle routes illegally and  converted them into their personal farms.
“There is no doubt we of KACRAN strongly believe that, reclaiming our encroached grazing reserves and reviving them through provision of water points and animals pasture will end most of the problem we are facing now.”
Bello said: “As law abiding Nigerians we bound to respect our constituted authorities and we humbly pledge our commitment in search of  solution(s) to peaceful coexistence.
“We strongly believe that the implementation of the directive will bring about lasting solution to the lingering problem between herders and farmers.”
He however said: “Non implementation of this presidential order will set a bad precedence that President’s directive can be ignored or thrown away and nothing will happen to punish those who clearly demonstrated the act of insubordination.
“Once we want to abundantly clearly state that, if the president’s order will be allowed to die naturally who’s order will be carryout or executed in the country, and are we God forbid, not moving towards anarchism and lawlessness?”
He said: “Enforcing the order  will stop our herders from unnecessary movement to the southern part of the country so as not to unnecessary be heating up the polity.
“Execution of this order will give due honour to our President and make herders repose confidence in the Government by firmly believing that government is capable of solving  their problems amicably, hence no need for the rising tension in various communities of our dear country.”
He stated that: “In view of the several benefits derivable from  enforcement of the said presidential special order and avert the ugly consequences, we once again appeal to the Hon Ministry of Justice and our highly respected Attorney General to kindly ensure the  timely implementation of the order by an Implementation Committee.
“It is our sincere belief  that, if our illegally occupied grazing reserves and blocked cattle routes which our livestock are using for free movement to their designated grazing reserves and water points, without moving through anybody’s farm are  reclaimed and revive, peace and stability will be easily achieved in the entire country.”