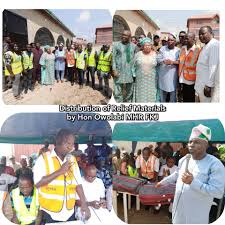 Posted By: The Gazelle NewsIn: NewsNo Comments
Print Email
Residents of Ifako Ijaiye Federal Constituency were in happy mood on Monday, 21 November, 2022, when the relief materials inspired by the member representing the Federal Constituency in the House of Representatives, Honourable James Adisa Owolabi arrived for distribution, reports thegazellenews.com.
The distribution of the relief materials was supervised by the officials of the Lagos office of the National Emergency Management Authority (NEMA).
This medium found out that Honourable Oowlabi wrote to the national office of NEMA about some of his constituents who were affected by flood resulting from torrential downpour in his constituency recently.
“Houses were destroyed and many were rendered homeless by the flood and we need the assistance of NEMA to come to the rescues of the affected residents,” Owolabi said in his letter.
The authorities of NEMA responded swiftly and the result was the distribution of the relief materials on Monday, 21 November, 2022.
Over 300 residents benefitted from the programme and each went home with: roofing sheets, duvet, 25kg rice, 10kg beans, bucket and cement among others.
Beneficiaries were profuse in their appreciation and praises for Owolabi whom they noted, has always been in the forefront of improving people’s welfare.
“This is not his first time of doing this. This is the fourth time he is bringing NEMA to Ifako Ijaiye to provide succour for flood victims,” one of the beneficiaries told thegazellenews.com