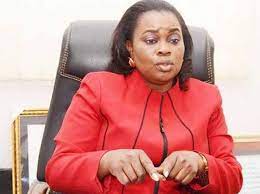 The Project Management Consultant for the Ilesa Water Supply and Sanitation Project, Engr (Mrs) Tawa Williams has reassured the government and the people of Osun that the implementation and completion of the project was not in jeopardy of abandonment.

She also debunked allegations of her removal as Project Management Consultant by Governor Adegboyega Oyetola, adding that she had instead received every necessary support from the Governor and the state to deliver on her assignment.

Engr Tawa Williams disclosed these in her response to a social media piece  titled ‘Settling political scores through people’s basic need in Ijeshaland’ in which the author alleged that Governor Oyetola had removed her as the Project Management Consultant so as to stall the completion of the Ilesa Water Supply and Sanitation Project, which was initiated by the immediate past administration.

But Engr. Williams, who lauded Oyetola’s interest in breaking the jinx of lack of potable water supply in  Ijesaland permanently, assured  the people of Ijesaland that  the project was on course and would be successfully completed to provide them potable water before the end of 2023.

According to Engr. Williams: ” The attention of the Project Implementation Unit of Ilesa Water Supply and Sanitation Project was drawn to a publication on one of the social media platforms peddling the rumour that the implementation/completion of the project is in jeopardy of abandonment as a result of the removal of Engr (Mrs.) Tawa Williams by Govenor Oyetola.

“The above assertion is very far from the truth in the sense that, since the assumption of power, Governor Oyetola had never interefered with the implementation of the project but had indeed given the necessary support whenever the need arose or was requested.

“He had never removed or even attempted my removal as Project Management Consultant to man the project.  Mr Governor has always provided support and encouragement for this project. Both the Honourable Commissioner and Special Adviser on Water Resources and Energy have also worked passionately on the project, performing their oversight functions diligently.

“As the Project Management Consultant,  my mandate includes working with the Honourable Commissioner (WR)and we report progress to the stakeholders such as the Islamic Development Bank, Federal Ministry of Finance, Federal Ministry of Water Resources and Ilesa Communities on the project.

“The issue of abandonment of the project never arose as no stone has been left unturned to ensure the successful completion of the scheme. As a normal phenomenon of life, the project is not devoid of its own challenges particularly with the advent of Covid-19 pandemic and effects of mining activities. However some of the project components are nearing completion.

“In proffering solutions to the effect of mining activities on the raw water bodies across the State which had affected the Ilesa Water Project as well,  Governor Oyetola inaugurated a Remediation Committee under the chairmanship of the  Deputy Chief of Staff, Prince Abdullah Binuyo.  I am a prominent member of that committee. Also, on the issue  of siltation  of the intake, Mr. Governor had graciously approved the dredging of the River Oyile for more water impoundment to service the Water Treatment Plant when completed.

“Considering the challenges that had bedeviled the project, the IsDB magnanimously extended the project tenure till December, 2023 to allow for a successful completion of the project.

“As a result of the above, the Ilesa Water Supply and Sanitation Project had never been politicized  as  the Governor is determined to break the jinx of lack  of  potable water supply in Ijesaland permanently. The people of Ijesaland particularly Ilesa can rest assured that the project is on course and will be  successfully completed to provide them potable water  before the end of 2023”, Engr. Williams said.

Engr Williams promised that everything would be done to sustain the tempo to deliver the job and enjoined the citizens to ignore the conspiracy theories being propounded by those who did not even have the full facts of the water project.