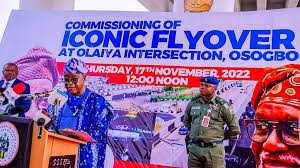 Posted By: The Gazelle NewsIn: NewsNo Comments
Print Email
Ondo State Governor, Arakunrin Rotimi Akeredolu, SAN, on Thursday, 17 November, 2022, inaugurated the iconic Olaiya flyover in Osogbo, the Osun State capital.
Akeredolu described the performance of Oyetola in the state as incredible and worthy of emulation.
This is even as Governor Adegboyega Oyetola said the construction of the flyover was a child of necessity aimed at putting a permanent end to avoidable road accidents and other mishaps hitherto being experienced by road users and residents of the State. 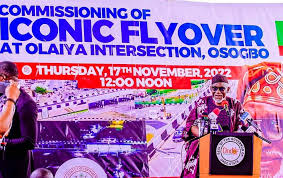 The newly-inaugurated Olaiya flyover was completed within the one-year time frame allotted to it a few months ago with a target to substantially ease the growing traffic, eliminate unnecessary cases of accident, secure the lives of the valued citizens and further enhance the architectural beauty of the State capital.
Addressing the people at the venue of the inauguration, Governor Oyetola said the successful completion of the flyover was an attestation to the efficacy of the Alternative Project Funding System, a novel development model introduced by his administration to boost the State’s development and infrastructure needs.
He said his administration has taken care of the fears and evil of fiscal indiscipline and lack of implementation, which hamper projects and services in the nation’s public service as seen in the myriad people-centred and masses-focused projects being inaugurated and delivered for the use of the people of the State in the about four years of being at the helm of affairs. 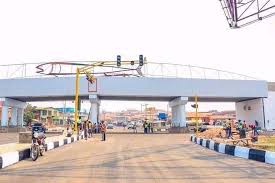 Images As Aregbesola, Others Welcome Buhari To Spain On State Visit