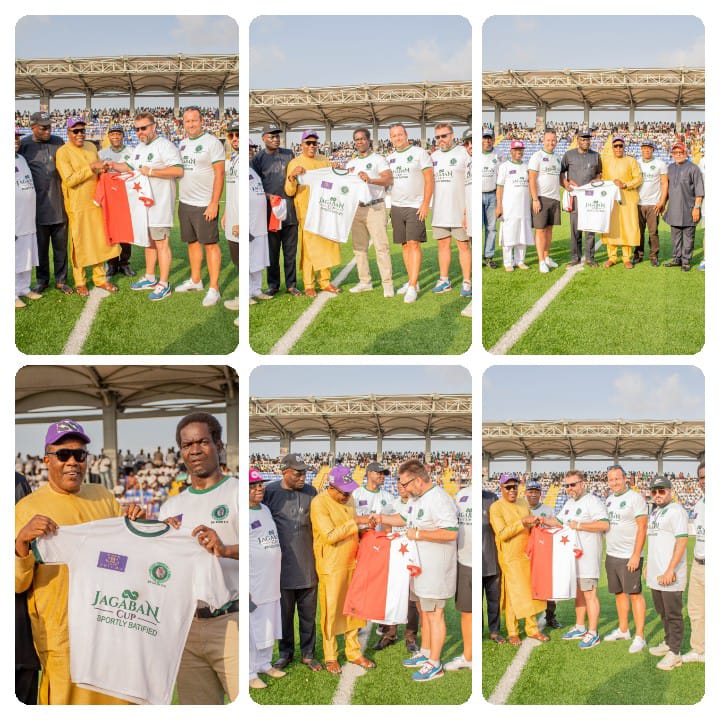 Posted By: The Gazelle NewsIn: News, Politics, SportsNo Comments
Print Email
The Director General of the All Progressives Congress (APC) Presidential Campaign and Other Elections Council, Senator Ganiyu Olanrewaju Solomon, has promised that the party’s Presidential Candidate, Asiwaju Bola Ahmed Tinubu, will ensure great synergy with European Football clubs and Nigeria youths if he is elected President of Nigeria in 2023, reports thegazellenews.com.
Commending the organisation of the recently-concluded 2022 Jagaban Cup Tournament held in Lagos, the former Senate Minority Whip, popular called GOS by admirers, associates and friends, thanked the 36 Lion Investment, Diamond Sports Management, Lagos Enigma, Slavia Praha, the participating teams and of course the fans who came out in their thousands to watch the matches.
He stated that the gains of the brilliant organisation should be taken on board to guarantee much better organisation of matches and championships.
On Friday, 18 November, 2022, GOS graced the final of 2022 Jagaban Cup which also had in attendance, the Lagos State Commissioner for Home Affairs, Honorable Prince Anofi Elegushi.
“There will be synergy between the Federal Government, European Football Clubs, Nigerian teams and youths if Asiwaju Bola Ahmed Tinubu is elected as President of Nigeria in 2023,” GOS said.
It will be recalled that over 7000 spectators were in attendance at the Mobolaji Johnson Arena to witness the final day of #JagabanCup22 on Friday, 18 November, 2022.
On his part, Prince Elegushi, showered encomiums on organizers for the success of 2022 Jagaban Cup.
“Our leader, Asiwaju Bola Ahmed Tinubu is a man who appreciates the impacts of youths to nation building. The attendance recorded shows the youths are solidly behind Jagaban. Organization of the tournament made me really impressed,” the Commissioner said.
Mr. Blessing Akinlosotu, President of Nigerian Youth Congress and Mr. Olayemi Success, Coordinator National Youth Mobilization APC also made their presence felt in the colourful closing ceremony of Jagaban Cup.
CEO of 36 Lion Investment, Hajj Olawale Liameed Gafar overwhelmed with Jagaban Cup optimism, said it’s all for Asiwaju.
According to the Talent Transformer, “It is all for the youths. Let us do for the doer.”
The competition was organized to galvanize support for All Progressives Congress Presidential Candidate, Bola Ahmed Tinubu who is the frontline candidate for the 2023 Presidential Election and the tournament delivered on its promises and even exceeded expectations.