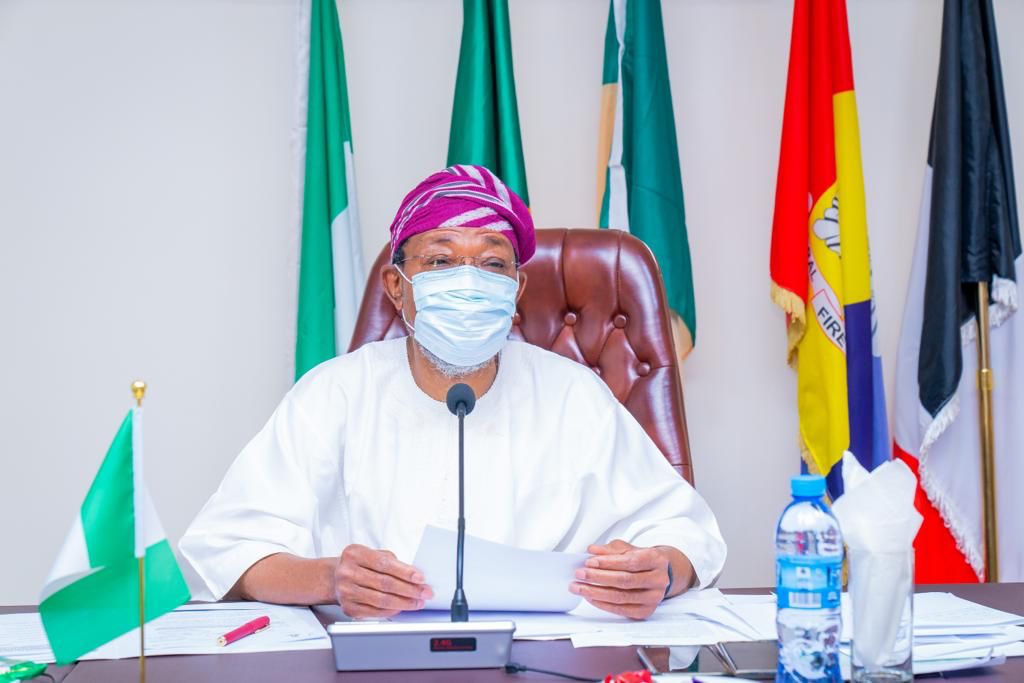 Posted By: The Gazelle NewsIn: NewsNo Comments
Print Email
The Federal Government of Nigeria has said that the 3,000 capacity Nigerian Correctional Service (NCoS) Correctional Village being constructed in Janguza, Kano State will be ready for commissioning in April 2022.
The Minister of Interior, Ogbeni Rauf Aregbesola, gave the update during the State House Press Briefing whilst answering questions from reporters at the Presidential Villa.
“In the period under review, we commenced the construction of 3,000 modern capacity custodial centre in each of the six geopolitical zones. Construction is almost at completion stages in Janguza, Kano State (85% completion) and will be completed by April, 2022; Karshi, in FCT (65% completion) and Bori, in Rivers State (40% completion).
“This would decongest the custodial centres, ensure good living condition for inmates, and support the implementation of the NCoS Act 2019 with the goal of rehabilitating, reformation, and reintegration of inmates,” the Minister stated.
The Minister who revealed that the NCoS, a Service under the supervision of the Interior Ministry, in keeping with its responsibility of rehabilitating and reintegrating inmates, has included the building of life centres into the 3,000 capacity custodial centres being built in each of the six geopolitical zones of the country.
“We have integrated the construction of life centers into the new 3,000-capacity custodial facilities in each of the geo-political zones. The focus of these centres would be on behaviour modification of inmates to reduce the rate of recidivism and facilitate the reintegration of inmates upon release from custody,” Ogbeni Aregbesola stated.
On escaped inmates, the FG assured Nigerians that fleeing inmates have nowhere to hide as those still on the run cannot fully reintegrate into the society as all their biometric data have been captured and all other critical information needed to exist as a full citizen has been digitally secured.
“I will like to inform Nigerians that we have captured the biometric information of all inmates in the facilities of NCoS working in partnership with the Nigerian Identity Management Commission (NIMC).
“Therefore, we have the capacity and are tracking all escapees from our facilities. In addition, we are working with and have shared the details of escapees with INTERPOL, to check the risks of cross border movements,” the Minister revealed.
On reformation and rehabilitation of the inmates, the Minister revealed that there are 465 inmates running different degree programmes at the National Open University of Nigeria.
“There are various ongoing reformation and education programmes for inmates in our custodial facilities. The Service, in partnership with the National Open University of Nigeria (NOUN), has increased the number of Study Centres to 10 across Correctional formations (Abeokuta, Anambra, Enugu, Kaduna, Keffi, Kuje, Lafia, Lagos, Port Harcourt, and Umuahia).
“There are currently about 465 inmates running various Degree programs, 85 of the inmates are running Post – Graduate Degree programs, four are running PhD programmes within the custodial facilities.
“A total of 560 inmates have been enrolled for WAEC/NECO Examinations, and 2300 for Adult Literacy Classes in several Custodial Centers. Additional Borstal Training Institutions for young offenders, male and female, are to be established in each State of the Federation,” Ogbeni Aregbesola stated.

Omo-Agege Felicitates With Omatseye At 60