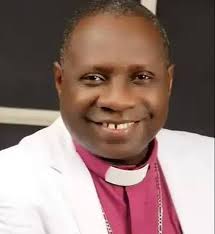 The Most Rev. Daniel Chukwudumebi Okoh has been elected the new president of the Christian Association of Nigeria, (CAN).

The announcement is contained in a statement by the CAN General Secretary, Mr. Joseph Daramola.

Meanwhile, PRNigeria gathered that the Kano-born and an indigene of Rivers State, Most Rev. Daniel Okoh is a de-tribalized Nigerian who has built friendship across religious and ethnic lines, not only in Nigeria but around the globe. He organises and participates in conversations and programmes that would bring about peaceful co-existence among the peoples of the world and sustainable development.

Rev. Okon is coming in at a time there’s so much religious disharmony and tension especially between Christians and Muslims.

It is expected that the new leadership of CAN, with his wide experiences in interfaith dialogues will take measures to reduce existing religious tensions, especially between Christians and Muslims in the country.

Okoh was born on November 12, 1963 in Kano to Christian parents. He is a native of Ndoni in Ogba/Egbema/Ndoni Local Government Area of Rivers State, Nigeria.

He is married to Ngozi and they are blessed with four children. Archbishop Daniel Okoh is a product of the famous Dennis Memorial Grammar School, Onitsha.

In 1988, he graduated from the University of Port-Harcourt in Second Class Upper Division in Political Science and Education.

Thereafter, he attended Christ Holy Church Seminary, Onitsha and was awarded a diploma in Theology. Since then he has undertaken many courses and participated in seminars that are relevant to his ministry work both in Nigeria and abroad.

As the General Superintendent of Christ Holy Church International – an African Independent Church – he leads his denomination in ecumenical relations with other denominations in the body of Christ and engages with people of other religions in dialogue for peaceful co-existence and sustainable development.

For more than 20 years, Most Rev. Daniel Okoh, has been actively involved in ecumenical relations and interfaith dialogue in and outside Nigeria through the following positions: International Chairman of the Organisation of African Instituted Churches (OAIC); National President of OAIC (Nigeria Region) (2005 – 2014); National Vice-President of Christian Association of Nigeria (2007 – 2013), former member, Board of Directors of Inter-Faith HIV/AIDS Coalition of Nigeria; Member, Governing Council of Good News Theological College and Seminary Accra, Ghana; Member, Nigeria Inter-Religious Council (NIREC);and Member ofthe Board of African Council of Religious Leaders – Religions for Peace.

He is also a board member of Christian Solidarity Worldwide (Nigeria). Between 2000 and 2003 he was the only African representative in the Steering Committee of the International Forum on Multicultural Ministry which was initiated and sponsored by the Mission and Evangelism Team of the World Council of Churches.

In the area of Politics and Governance, Archbishop Daniel Okoh was one of the six delegates that represented Christian Association of Nigeria (CAN) in the National Political Reform Conference of 2005 organised by Federal Government of Nigeria. From 2009-2011, Most Rev. Daniel Okoh served on the board of National Orientation Agency (NOA) as an Institutional representative of Christian Association of Nigeria.