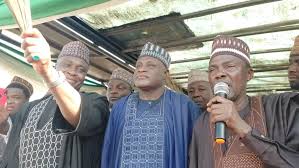 Posted By: The Gazelle NewsIn: NewsNo Comments
Print Email
The People’s Democratic Party (PDP), Kebbi Central Zonal Women leader, Hajiya Yar Sokoto Jega has dumped the PDP and joined the ruling All Progressives Congress (APC) in Kebbi State.
Announcing her defection from PDP to APC in Birnin Kebbi this Tuesday, 9 August, 2022, Hajiya Yar Sokoto Jega said what informed her decision to join the APC was the injustice and lack of purposeful leadership in PDP.
She also attributed record of monumental achievements of the Governor, Senator Abubakar Atiku Bagudu as the driving force which influenced the decision to join with over 800 of her supporters into APC
According to her, “I have been in PDP for many years, they have nothing to show to people. I use even my money for the cause of the party, but yet I have not seen any change with my people “.
Hajiya Yar Sokoto Jega before her defection to APC was in charge of eight local government areas under the party she left with large followers.

Bisi’s Franktalk: Kid Bandits In The North; Child Cultists In The South: Who Will Deliver Nigeria?