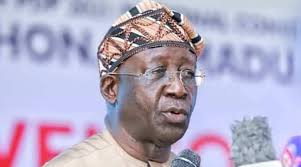 Posted By: The Gazelle NewsIn: News, PoliticsNo Comments
Print Email
Our attention has been drawn to the reckless and unrealistic claim of the opposition PDP to win Lagos and 24 other states in the forthcoming elections.
While we acknowledge the consistency of the opposition party in its permanent day-dreaming and irresponsible permutations, it’s advisable to be more discerning in order to be able to absorb the shock of their impending devastating defeat. It’s also laughable that it came from its National Chairman, Senator Iyorchia Ayu who has been declared personal non-grata in his home state.
Nigerians stopped taking PDP seriously before now with its intransigent crisis which is a clear reflection of poor leadership and ability to manage its affairs.
How can a party that has been in a free fall since its presidential primaries and even mismanaged funds to build its national headquarters lay any claim to integrity, hope and vision?
I’m not aware that the PDP national chairman, Senator Iyiorcha Ayu has been able to clear the corruption allegations against him.
It’s certainly not enough to dream of winning a certain number of states, the reality on ground is in total contrast.
Lagos State remains an impenetrable fortress for PDP with its more than two decades of electoral abysmal performance.
The incumbent Governor, Mr. Babajide Sanwo-Olu, has earned his place of pride and preference by well meaning Lagosians to consolidate on the landmark achievements of the first term in the next tenure.
PDP at whatever level does not constitute a threat to our retention of power in Lagos state and at the center.
Nigeria will certainly not go back to the years of the locust.
In any electoral process, talk is cheap but the real language of communication is the PVC.
The PDP has no reason to be hopeful.
Seye Oladejo
Lagos State APC Spokesman
16/11/22