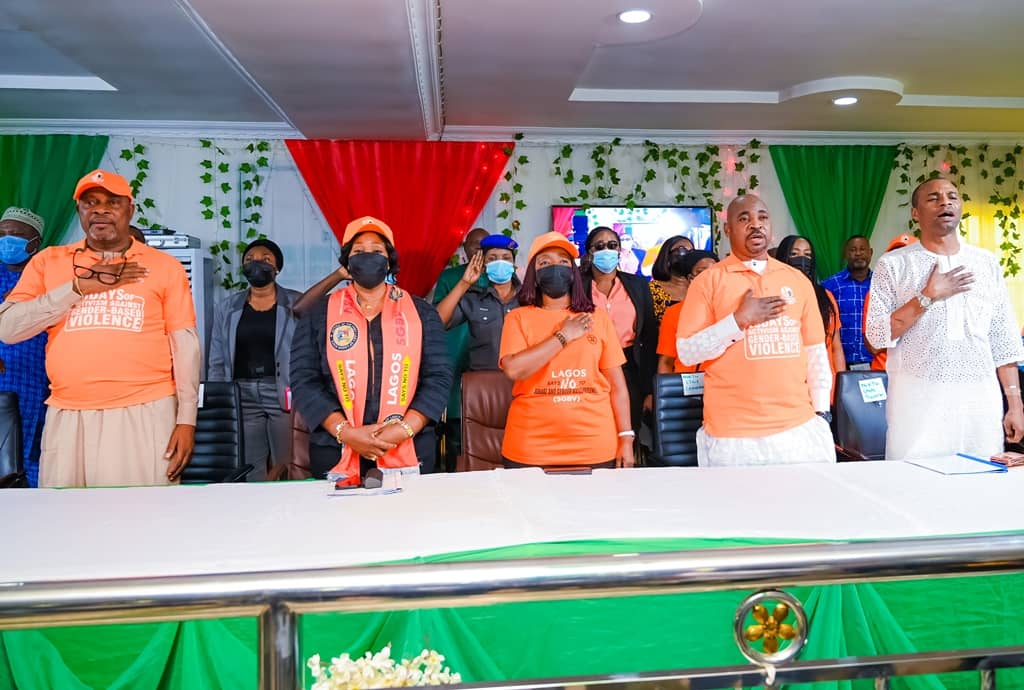 Lagos State First Lady, Dr. Ibijoke Sanwo-Olu on Thursday, 9 December, 2021 urged members of the National Union of Road Transport Workers (NURTW) to key into the fight against Sexual and Gender-Based Violence (SGBV) and become ambassadors of the advocacy to stamp the menace out of the society.

She spoke at the State Headquarters of NURTW located in the Oko-Oba area of Agege during a sensitization visit organized by her office for over 1,000 transport union workers in line with the ongoing global 16 days of activism against SGBV.

“We have been moving across the state with this advocacy. This time around we decided that we are coming to meet our brothers and sisters of the NURTW here. This is the first time I am coming here and I am happy to be with you. We are reminding everyone that we should not be involved in domestic violence and sexual violence.

“These are things that are wrong and we should not take them lightly. We must kick these crimes out of Lagos State. When a woman says no, her no should mean no and it must be respected. When you see something, you must say something and do something. You all must be our ambassadors against the menace,” she said.

The First Lady said like all other professions, it was unlikely to have one or two bad eggs among transport workers, adding that others must work to expose and shame such members so that they do not continue to soil the collective image of the transport union.

She said the State Government had enacted a law that supports the Sex Offenders Register to name and shame perpetrators of sexual crimes, just as she spoke against encouraging intake of all sorts of sachet alcoholic beverages and mixtures which could trigger mental health and SGBV issues.

She said in addition to the earlier unveiling of signposts against SGBV in some Local Government Areas, efforts would soon be made to declare car parks and bus parks as Rape Free Zones, among other initiatives to stamp out the menace.

Also speaking, the Wife of the Deputy Governor, Mrs. Oluremi Hamzat urged parents to wake up and be vigilant in protecting their children against sexual predators, saying it had been observed that abuse of minors was now rampant.

In his welcome remarks, the State Chairman of NURTW, Alhaji Musiliu Ayinde Akinsanya, popularly known as MC Oluomo commended the First Lady for the advocacy against SGBV, saying members of the union were happy to receive her.

He said it was gratifying to note that hooliganism and the sale of alcohol have now become history in the bus parks controlled by the NURTW, adding that no efforts would be spared to sustain peaceful conduct by members of the union.

“Personally, I have never tasted alcohol in my life. I have never smoked cigarettes as well. I will never be in a position to encourage drug abuse and sexual abuse by our members.

“It is also worthy to note that the issue of hooliganism especially during the change of leadership in the parks is now a thing of the past in our Union. We also have children who we are praying to God to be successful in life. Therefore, we will continue to speak out against acts of violence in any form,” Akinsanya said.

At the advocacy visit, an expert on SGBV matters and a retired director in the Lagos State Ministry of Health, Mrs. Ibudunni Alakija-Ladapo anchored a special lecture on SGBV, while various information materials were distributed to members of the NURTW who were drawn from across the state.