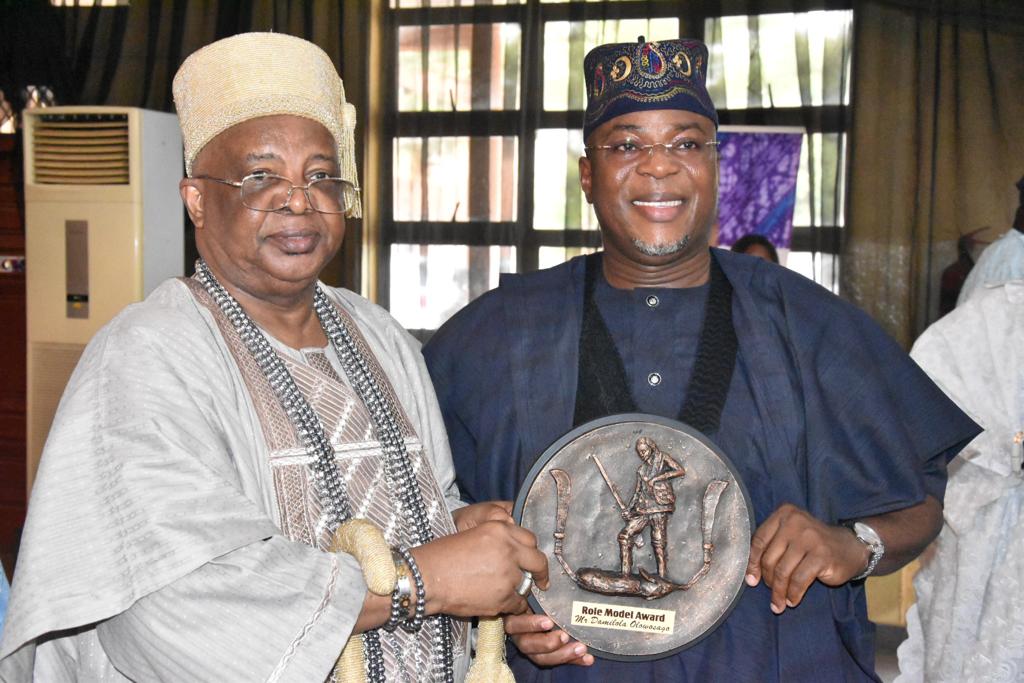 Posted By: The Gazelle NewsIn: NewsNo Comments
Print Email
The Permanent Secretary of Housing, Mr. Kamar Damilola Olowoshago has been recognised for his continued efforts towards the development of Ikorodu division and Lagos State in general at the annual Ikorodu Oga 2022 Awards.
He was today, Tuesday, 15 November, 2022, honoured with the Role model Award of the Year from the Ayangburen of Ikorodu Kingdom, HRM Alaiyeluwa Oba (Engr.) Kabir Adesile Shotobi.
Olowoshago was born to the prestigious family of Late Alhaji (Chief) Abdul-Hameed Arowolo Dawodu-Olowoshago (Arowolo bi Oyinbo) the Baba Adeen of Ikorodu and its environs and Alhaja (Chief) Halimat –Ul-Shadiah Dawodu-Olowoshago (Nee Yusuf Mosenne) the first Olori Giwa – Giwa (Obinrin) of Ikorodu Central Mosque and Asiwaju Adinni of Aga Mosque, Ikorodu.
He had his Primary Education at All Saints Private Schools, Ikorodu from 1974-1979.
Young Olowoshago sat for the Common Entrance Examination in 1979 and was the 3rd Best Student in the whole State.  He thereafter proceeded to the Premier College in Ikorodu Division, Oriwu College, Ikorodu for his Secondary Education between 1980 and 1985.  He attended Igbobi College, Lagos, for his Higher School Certificate (A Levels) between 1986 and 1988.
Having obtained the requisite qualification, Mr. Kamardeen Olowoshago gained admission in 1989 to Lagos State University for his B. A. combined Honours in English and Education majoring in English Language.  Mr. Kamar Olowoshago was the best graduating Student among his class set having led the pack right from 1st Semester 100 Level through to 2nd Semester, 400 level winning the prize for Best Graduating Student (English) in 1993/94 Session.  In his quest for further knowledge, Olowoshago returned to the University of Lagos and obtained a Master Degree in International Relations and Diplomacy (1997).
Mr. Kamardeen Olowoshago’s career began in 1997 at the Lagos State Polytechnic Isolo, now Lagos State University of Science and Technology, Ikorodu as an Assistant Lecturer (Part Time) in Use of English and Communication Skills.  He was the Pioneer Director of Studies of the School of Part-Time Studies, Ikorodu Annex.   In 2000, he joined the Lagos State Public Service and  has had a very impressive Public Service Career.
The Ayangburen of Ikorodu described  Olowoshago as a highly dedicated, loyal and resourceful person who has contributed immensely to the upliftment of Lagos State in general and Ikorodu in particular. The royal father said the award is not only to acknowledge Olowoshago’s uniqueness but also to encourage others to emulate him.
Responding, Olowoshago expressed  appreciation to the royal father and community leaders present at the occasion while pledging to continue the good work with increased fervour.
Olowoshago has served in various capacities in different agencies and has made many  outstanding and innovative contributions to the Lagos State. He is presently the Permanent Secretary, Ministry of Housing Lagos State.
The event was attended by notable sons and daughters of Ikorodu, dignitaries  from far and wide including some members of Lagos State Body of Permanent Secretaries.

Tragic: Popular Lagos Hotelier Killed By Wife Because He Allegedly Impregnated Another Woman

We Won’t Allow You Impose Your Stooge On Us, OPC Warns OBJ