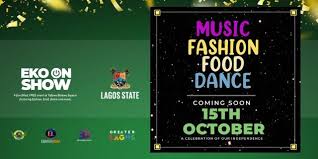 Lagos To Celebrate Nigeria’s Independence With “Eko On Show” Festival

As a way of reviving the entertainment scene in Lagos State while also strategically showcasing the State as the soul of entertainment of Nigeria, the State’s Ministry of Tourism, Arts and Culture is set to celebrate Nigeria’s Independence with the “Eko on Show” festival slated for Friday, 15th October, 2021 at Muri-Okunola Park, Victoria Island.

The festival, according to the state Commissioner for Tourism, Arts and Culture, Pharm. (Mrs) Uzamat Akinbile-Yussuf, will feature A-list artistes like Davido, Tiwa Savage, Ayra Starr, Teni, D’banj, among others, while veteran musicians like Dede, Kwam 1 and Shina Peters are also billed to perform at the event.

Making this disclosure at a Press Conference on Tuesday, at Muri-Okunola Park, Victoria Island, the Commissioner noted that the festival is in continuation of Nigeria’s Independence Anniversary celebration, through music, fashion show, dancing and a display of tantalising array of food and drinks to entertain Lagosians, Nigerians and the world as a whole.

Akinbile-Yusuff noted that the Ministry is continually seeking for better ways to sell the rich potentials of Lagos State to the world as evident in the State’s recent declaration as the holder of the world’s largest anniversary logo made with cupcakes mosaic by the Guinness World Records.

Being the holder of the Guinness World Records in this regard, the Commissioner noted, has put Lagos State on the world stage, especially tourists across the world, who now see what Lagos could offer in terms of breaking new grounds in creativity and innovations.

She said: “This October 15 event is also a way of sending a message to the entire world that Lagos, apart from being a land of creativity and innovations, is also the soul of entertainment, fun and relaxation, rich in culture and hospitality.”

She added that the event was conceptualised based on the need to provide a platform to enhance the State’s competitive positioning as a top 5 tourist destination in Africa; build on the inherent creativity of Lagosians and establish the State as a vibrant and innovative tourism destination that diversifies the economy, creates jobs across multiple tourism segments and offers the world access to the ingenuity and hospitality of the residents.

“Specifically, this event will feature an exceptional experience of good music, fashion, food, and dance Extravaganza and lots more. We will be showcasing most of our local contents at this event”, Akinbile-Yussuf stated.

The Commissioner explained that the administration of Governor Babajide Sanwo-Olu remains committed to the quick recovery of the entertainment and tourism sector in line with the T.H.E.M.E.S developmental agenda, especially the fifth pillar which stands for Entertainment and Tourism.

She added that: “This administration has committed huge resources to produce film makers of international standards, fashion designers of class, musicologists, dancers and lots more professionals in the creative field, saying that the ‘Eko on Show’ event will serve as a platform through which these talented individuals will showcase their creativity”.

The Special Adviser on Tourism, Arts and Culture, Mr. Solomon Bonu, in his remarks, stated that the Ministry realized that the entertainment sector which directly impacts the majority of the youth population, should be made vibrant and active despite the prevailing COVID-19 pandemic.

He also disclosed that the October 15 date which coincidentally is the felabration week celebration, would provide different avenues of fun for Lagosians, assuring that the State Government has over the years supported the hosting of the annual celebration of Felabration; a festival of music and arts commemorating the life and times of Nigeria’s foremost musical icon, the late Fela Anikulapo Kuti.

On her part, the Permanent Secretary in the Ministry, Princess Adenike Adedoyin-Ajayi informed that the event will be a hybrid version in line with COVID-19 protocols and will be used to further reopen the entertainment sector amidst Covid-19.

She urged interested participants to register ahead to take part in the show and obtain free tickets on https://tix.africa/eko, saying that the tickets available are limited.

The registration, according to her, will enable the State Government make solid preparations for the event and ensure that the proposed number of participants is controlled and adhered to in line with covid protocols and in compliance with the capacity of the event’s venue.

In their separate contributions, Ara the Drummer; Teni, the Entertainer and Dede Mabiaku, a versatile musician applauded the “Eko on Show” initiative and promised the best of entertainment for thousands and millions of fun lovers that would join the show either physically or virtually.

It should be noted that this is the first time that the State Government will be hosting an outdoor entertainment event since the outbreak of COVID-19 pandemic last year.