By The Gazelle NewsNovember 17, 2022No Comments2 Mins Read 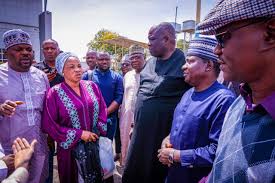 Share
Facebook Twitter LinkedIn Pinterest Email
Plateau State Governor and Director General of the All Progressives Congress Presidential Campaign Council (APC PCC), Simon Bako Lalong, has commiserated with the people and Government of Lagos State over the demise of Late House of Assembly member, Hon. AbdulSobur Olawale who died in Jos shortly after attending the APC Presidential Campaign flag-off in Jos.
Governor Lalong who escorted the corpse of the deceased lawmaker to the Yakubu Gowon Airport Heipang for onward movement to Lagos for burial said he was shocked over the death of the lawmaker who died shortly after attending the flag-off of the APC Presidential Campaign held at the Rwang Pam Township Stadium Jos.
The PCC DG expressed heartfelt sympathy and condolences to the immediate family, friends and associates of Late Hon. AbdulSobur Olawale (Omititi), his constituents and to Governor Babajide Sanwo-Olu of Lagos State.
Lalong said the death of the lawmaker is a huge blow to the Lagos State House of Assembly where he served the people of Mushin Constituency 2 with courage, determination and passion.
He said the commitment of the deceased lawmaker to the cause of the APC and the candidacy of Asiwaju Bola Ahmed Tinubu ensured that he not only mobilised support for the party and the candidate, but also motivated him to come all the way to Jos to be part of the flag-off off of the Tinubu/Shettima Presidential Campaign.
Lalong asked God to give the family the fortitude to bear the loss and prayed that Almighty God to grant his soul eternal rest.