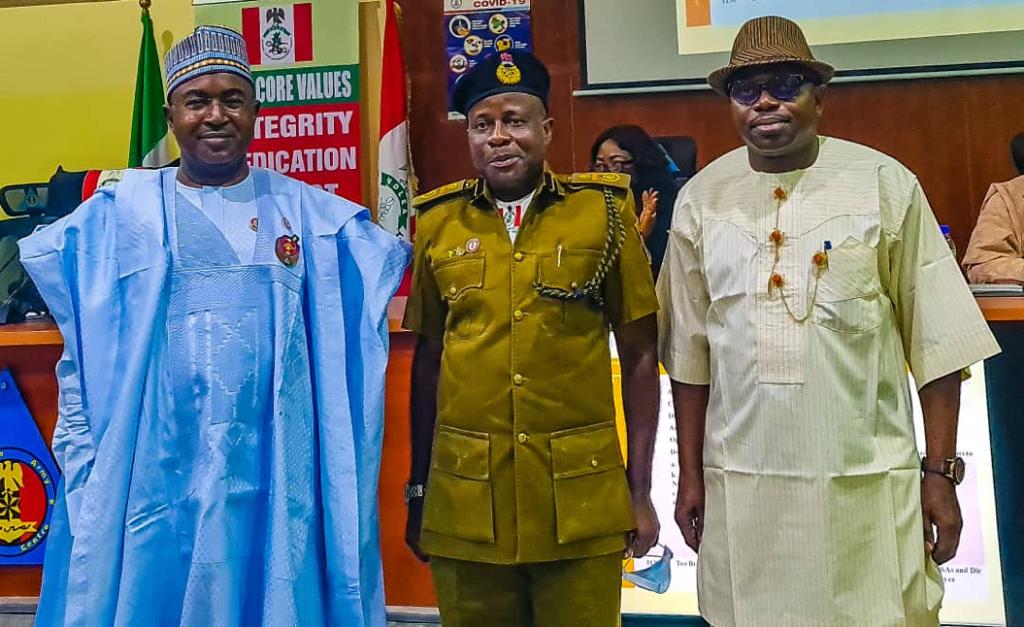 Posted By: The Gazelle NewsIn: NewsNo Comments
Print Email
Chairman/Chief Executive of the National Drug Law Enforcement Agency, NDLEA, Brig. Gen. Mohamed Buba Marwa (Retd) has tasked officers and men of the anti-narcotic agency to make it difficult for drug barons, traffickers and cartels to operate in Nigeria in the new year, 2022.

He gave the charge on Tuesday, 21 December, 2021 at a meeting with the Directors, Zonal Commanders, State, and Special Area Commanders, during which four state commands and 25 officers were given cash-backed awards and commendation letters for their outstanding performance in the areas of drug supply reduction, drug demand reduction and diligent prosecution of cases in the last quarter of the year, 2021. He seized the opportunity to thank President Muhammadu Buhari for his constant support and encouragement to the NDLEA and its work.
According to him, the figures of our Drug Supply Reduction activities have skyrocketed: 11, 340 arrests and 1,111 convictions in 11 months. These figures are balanced by equally impressive Drug Demand Reduction stats: 7,066 counselled and rehabilitated, all in our facilities. During the 11 months, we have successfully mopped up over 3.3 million kilograms of assorted drugs; away from the streets of Nigeria; away from criminals, terrorists and bandits; away from our youths.
“These awards and commendations ceremony is an attestation that the leadership of NDLEA is keeping its side of the bargain, to wit, to motivate the NDLEA workforce as a means of getting the Agency out of the rut in which it was stuck for years. It was to this end that we instituted, among other measures, the Bimonthly Best Performing Command Award, which after two editions was transformed into the Quarterly Awards. The transmutation notwithstanding, the objective remains to reward individual hard work and diligence of officers and to appreciate the collective effort of commands. 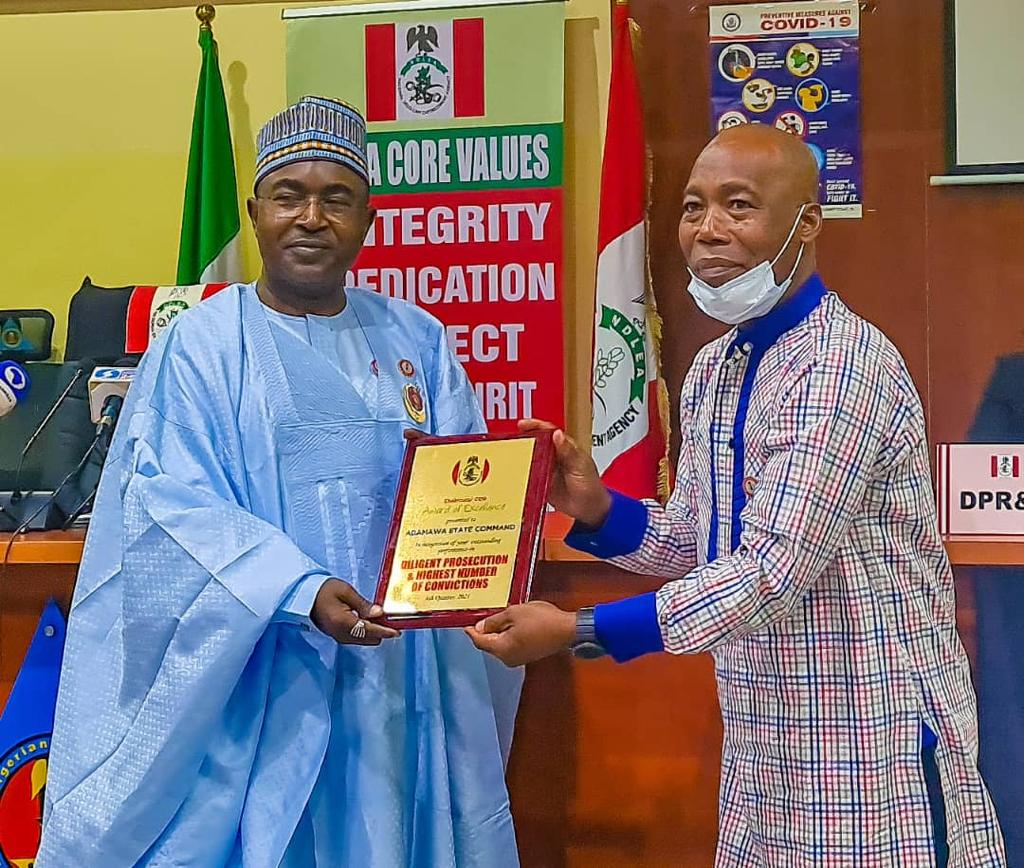 “It cannot be gainsaid that the awards have not been successful. From all indications, our reward scheme has galvanized the NDLEA workforce as evidenced by our daily and weekly performance, which attracts national and international accolades. Just three weeks ago, at the ICPC 3rd National Summit on Diminishing Corruption in Nigeria, held on November 30, 2021, our officer was one of three distinguished Nigerians honoured by the President with the 2021 Public Service Integrity Award. That speaks volumes about the renewed work ethics within the Agency. With a sense of modesty, he deserves a pat on the back for the good work that earned him the national award.

“As for those hurdles that were the sources of stagnation and disenchantment, the leadership of NDLEA has dismantled most, if not all of them. We have made a case for a new salary structure; we have harmonised our rank structure and stagnated ranks through the promotion of 3,506 officers and men; we have rejigged our welfare scheme and now have a functional insurance scheme; we paid burial entitlements to the families of officers lost in the line of duty. We have practically doubled our strength in term of personnel in one year. We will be having barracks in the new year. Thanks to Mr. President. A whole lot of reforms are ongoing. We have not taken our hands off the plough. The management is working to cover lost grounds and restore the Agencys parity with other similar government apparatus. 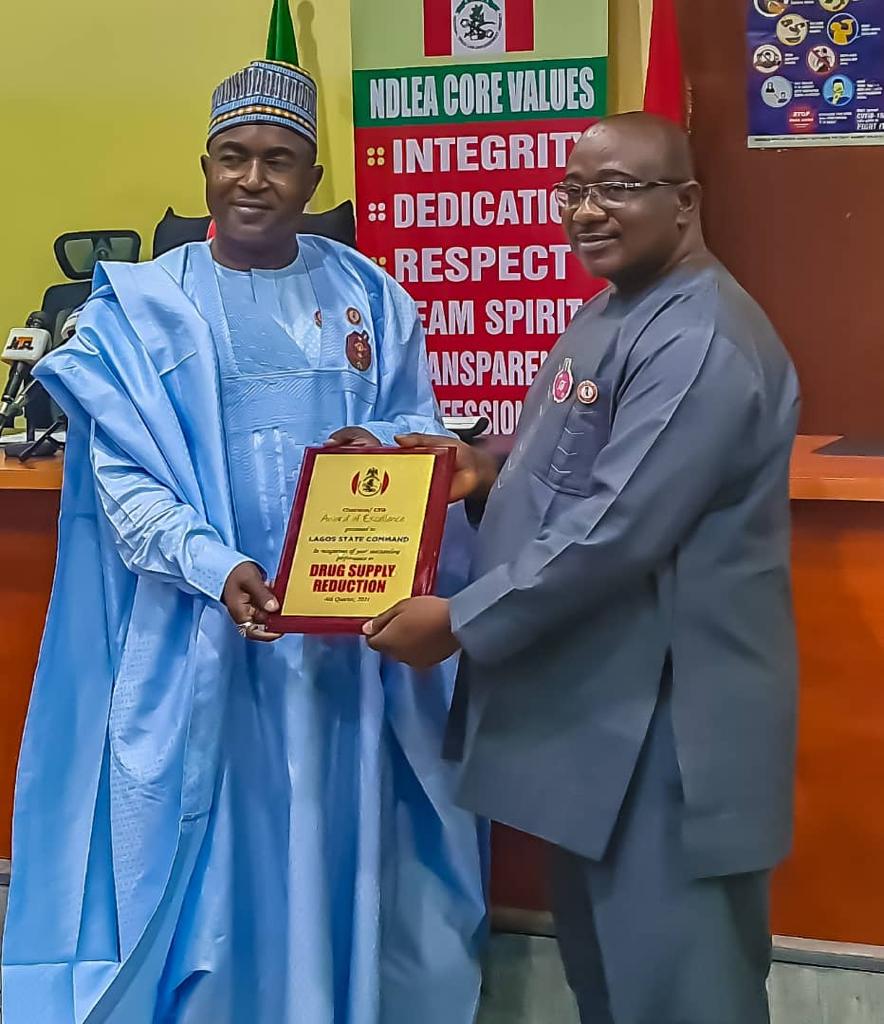 “We must as individuals and as a collective reflect on this positive development. And for those we are complimenting today, the awards, the recognition, should further motivate you to go the extra mile. In doing that, I urge you: do not trample upon discipline according to our creed; do not compromise your loyalty to the ideals and ethos of the Agency, and finally, constantly rededicate yourself to duty and attainment of organisational goals.
“We are doing our utmost to win this war against drug abuse and trafficking of illicit substances, both from a policy perspective (such as the launch of the National Drug Control Master Plan, NDCMP 2021-2025) and from a tactical perspective (like the gradual takeoff of War Against Drug Abuse, WADA, across the 36 states). The onus is now on us to ensure that our performance will not become a flash in the pan.
“This awards ceremony should imbue us with the nous to sustain the momentum and the upward swing. This is my charge to the entire NDLEA workforce: We must in good conscience continue to justify the enormous energy we have invested this year in turning around the fortunes of the Agency. To the entire NDLEA workforce, I can assure you that we can look ahead into the future without anxiety. We should be confident that better days are here. However, we need to constantly remind ourselves that our performance is the catalyst that will hasten our journey to a drug free Nigeria.”