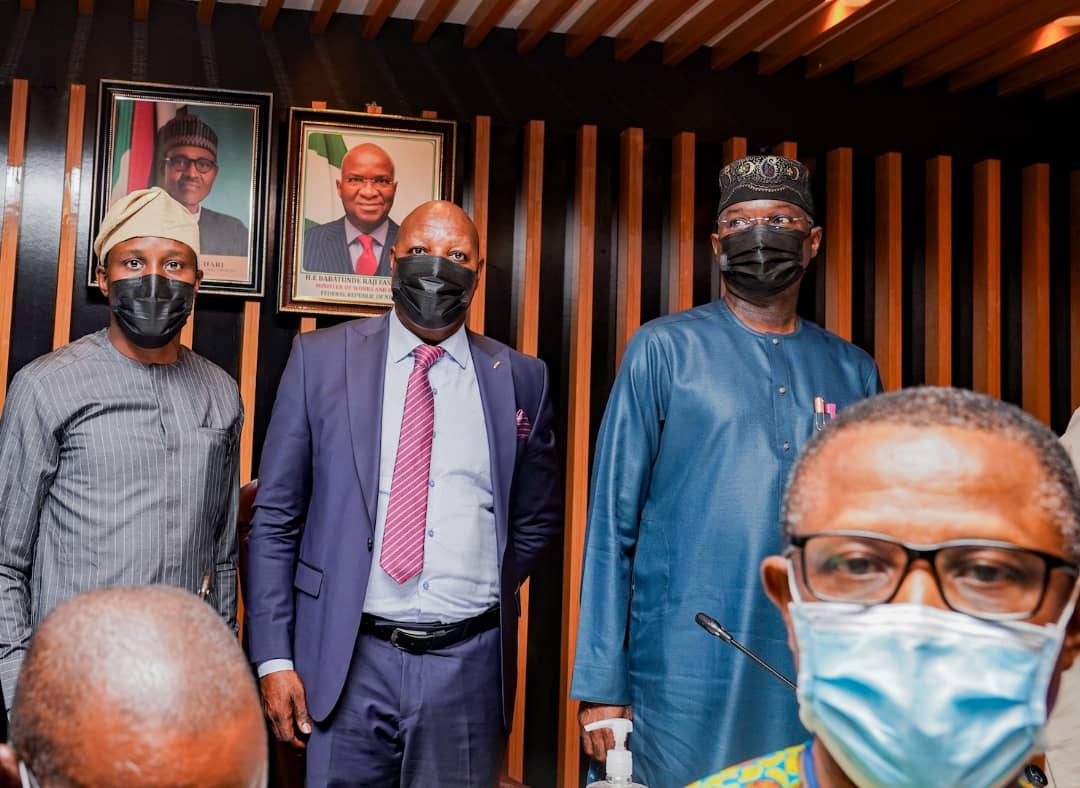 Nigerians can now apply for houses built under the current Federal Government’s National Housing Programme (NHP) in 34 states of the country following the launch, Friday of the portal by the Minister of Works and Housing, Mr. Babatunde Fashola, SAN through which interested members of the public could apply for allocation.

The formal launch of the portal, https:// nhp.worksandhousing.gov.ng, which took place at the Conference Room of the Ministry in Mabushi, Abuja, throws open the door for Nigerians to apply online to buy the available 5,000 plus housing units, ranging from 1, 2 to 3 bedroom bungalows and blocks of flats in any location of their choice.

In his remarks at the ceremony, which was attended by prominent stakeholders and media executives including the President, Nigeria Guild of Editors, Mr. Mustapha Isah, Fashola said the decision by the Ministry to sell the available houses online was to bring credibility to the exercise and reduce human intervention as well as give all categories of buyers a level playing field.

The Minister told his audience, “We converge here just to introduce a portal on which the National Housing Programme pilot will be offered for sale to the public.  What that means is that we will not be selling printed forms, the forms are online and this allows for more openness, limits human intervention and any disposition to any underhand practice”.

Clarifying that the decision to adopt online sale of forms and limit human intervention was not an indictment of the staff, he added, “It is just to make the system more accountable and people seeing credibility if they win and if they are not successful they will equally know that the system has at least given them a fair chance”.

Fashola, who described the launch of the portal as “the end game of our economic objective”, explained that the government did not just set out to build houses, adding that the project has served many purposes, the first of which was to test what sort of houses Nigerians would like to live in so as to make policies to guide its agencies and parastatals, as well as other stakeholders, to build what could be acceptable in the markets.

“We are the policy head of those parastatals like the Federal Housing Authority (FHA), the Federal Mortgage Bank of Nigeria (FMBN) and so on. We are saying that the National Housing Programme had not succeeded in the past and some of the houses built then still remain empty. So we conducted a national survey across the zones just to find out what is acceptable”, the Minister said.

The findings, he said, were that while in the Northern part of the country there was preference for bungalow and large expanse of land which encouraged building horizontally, in the Southern part, there seemed to be acceptance for blocks of flats and lack of space which made building vertically necessary.

Emphasizing that the current National Housing Programme is a pilot or demonstration scheme meant, among others, to galvanize private sector participation, Fashola explained further, “We applied for land from the states and we set out to do a demonstration or a pilot programme because we then wanted to validate what we saw and build a pilot scheme”.

“So as at today we have built 5,000 plus units in different stages of completion. We have done in Phase 1 and we have done in Phase 2 and some have started in Phase 3”, the Minister reiterated adding that the other purpose the scheme has served was to fulfill part of the objectives of the administration’s Economic Recovery and Growth Plan (ERGP).

He added, “It was also a way to implement our Economic Recovery and Growth Plan (ERGP) because as at the time we conceived this programme, the country was in recession”, expressing delight that it has fulfilled that objective because over 1,000 contractors were engaged on the building sites; “businesses owned by Nigerians and Nigerian contractors”.

In his goodwill message after the launch, President of the Nigerian Guild of Editors (NGE), Mr. Mustapha Isah, commended the Federal Government for its commitment to housing delivery. He also commended the Minister for the innovations he has brought to bear at the national level, which, according to him, was a replication of his development initiatives as Governor in Lagos State.

Also in his remarks, the Permanent Secretary, Mr. Babangida Hussaini commended President Buhari and the Minister for their commitment to programmes and projects that promote prosperity for the citizens and grow the nation’s economy.

Aside the NGE President, other media personalities present were the Special Assistant, Digital/New Media to President Muhammadu Buhari, Mr. Tolu Ogunlesi, the Secretary General of the NGE and Editor, Nation’s Capital, THISDAY Newspaper Group, Mr. Iyobosa Uwugiaren and the Deputy-Editor, BusinessDay Newspaper, Abuja Bureau Office, while from the Ministry, were Directors, Special Advisers and other top officials as well as Media Correspondents.