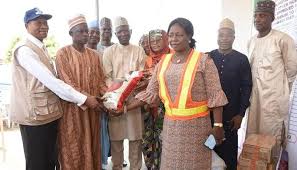 National Emergency Management Agency (NEMA) on Thursday handed over foods and other items to the Kwara State Government under the Federal Government Special intervention of assorted grains and approved relief materials for distribution to persons affected by 2022 flood and other natural and human induced disaster.

“I am glad to say that with assessments conducted and reports to the Ministry of Humanitarian Affairs, Disaster Management and Social Development His Excellency President Muhammadu Buhari approved the release of 12,000 metric tons of assorted grains from the National Strategic Reserve Stock for distribution to states of the federation and the FCT,” Director General of NEMA Mustapha Ahmed announced at the event held in Ilorin, Kwara State capital.

“You will all agree with me that in the last couple of months some states of Nigeria including Kwara State have suffered widespread flood disaster. The unfortunate flood incidents have resulted in loss of lives, human displacement, loss of means of livelihood socio-economic dislocation.”

Represented by the Deputy Director ICT and Technical Director to NEMA DG Sani Lokoja, the DG said NEMA’s operations office in Minna has continuously worked with the Kwara State Emergency Management (KWASEMA) to conduct damage and loss assessments to guide relief intervention to persons in need of support in Kwara State.

“I want to also use this opportunity to appeal to His Excellency Governor of Kwara state to set up and strengthening the Local Emergency Management Committees (LEMCs) in all the Local
Government Areas of Kwara state to take disaster management to the grassroots in line with global best practices. This is with the understanding that every disaster happens in particular community and in a particular Local Government. The first life-saving responders are always from the community. As we always say; disasters are always local and lifesaving first responders are always local too. In this regard, I also want to appeal to Your Excellency to set aside a predictable funding to Kwara SEMA to enable the Agency intervene timely to save lives and safeguard the livelihoods whenever disasters hit,” Ahmed added.

In his response, Kwara State Governor AbdulRahman AbdulRazaq who was represented by the Secretary to the State Government Prof Mamman Saba Jubril called on the federal government to find lasting solutions to the perennial flooding affecting communities around Rivers, Niger, and Benue.

“Compensation by giving money, foods and other items in most of the affected communities is like scratching the problem from the surface. We want the federal government to come up with permanent solutions to the problems. We know it could be very costly but they deserve it. This is beyond the state government.

“Some of the solutions to this problem include dredging of rivers to contain more volume of water and avert overflowing; construction of dyke around the rivers; planting of trees along river banks; discouraging farming around riverbanks and dredging of Baro Port in Niger State,” he suggested.

AbdulRazaq recalled that the government had earlier distributed relief materials to victims of flooding in Patigi, Edu, and Moro local government areas.

“We also gave cash compensations to the victims of fire disaster in Alanamu area of Ilorin. His Excellency Mallam AbdulRahman AbdulRazaq came to their assistance immediately the fire incident occurred. We also had similar fire disaster in Ipata Market Ilorin and he did the same thing. We had rainstorm disaster within Ilorin metropolis and they were also compensated adequately,” he said.

Also speaking, the Chairman Kwara State Environmental Task Force Razaq Jiddah appreciated NEMA for its continuous support to the state government and the people of the state.