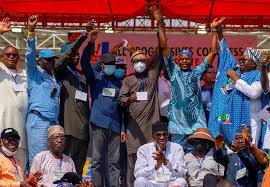 Posted By: The Gazelle NewsIn: News, PoliticsNo Comments
Print Email
Your honours, members of the Governor’s Advisory Council here present,
The Deputy Chairman of the Party,
The State Secretary of the Party,
Members of the State Executive Committee of the Party,
Members of the 2023 Advisory Council of Presidential, Governorship and Other Election of the All Progressives Congress (APC) Lagos State,
Members of the 2023 Presidential, Governorship and Other Election of the All Progressives Congress (APC) Lagos State,
Party Stakeholders and Supporters here present,
Gentlemen of the Press,
Ladies and Gentlemen,
I am delighted to be with you here this morning to inaugurate the State campaign committee for the 2023 Presidential, Governorship and Other Election of the All Progressives Congress (APC) Lagos State.
This underscores the importance the party attaches to this particularly important committee and the task before you.The members of the committee were carefully selected owing to your individual abilities and the believe that you will collectively as a committee deliver the state to the party.You are enjoined to work as a team and to carry everyone on board.
You are also recommended to reconcile seeming differences within members of the party which might have arisen following the Party primaries, for us to confront the election with a united front.
I have no doubt this powerful committee under the direction of Distinguished Senator Ganiyu Olanrewaju Solomon and coordination of veteran and political management guru, Ogboni Fouad Oki, will do us proud and win overwhelmingly for our dear Party APC.
I am glad to say with sense of satisfaction the growing fortunes of the party in Lagos back-to-back the last six (6) election cycles.
This will no doubt increase our chance of winning the election with landslide victory. May l call on the committee to concentrate on issues that will add value to the success of the party and avoid issues that may distract us from the path of victory.
We should remain resolute, committed and law abiding throughout the assignment and beyond.I also wish to call on the officials, party stakeholders and our loyal party members to support the committee in achieving its set target of delivering Lagos state to APC.
I want to charge you all to put in all your efforts during the next four months of the campaign to ensure that our Party record a resounding victory in all the elections state-wide.Today’s inauguration of the Campaign Committee consolidate our preparation for the general election.
The task ahead of us is enormous, but with the quality of membership of this Committee, I am positive that our Party will once again prove its ability to successfully midwife another victorious election outing in 2023. We must live up to thet billing.
Distinguished ladies and gentlemen, your nomination to serve in this committee is based on your knowledge and ability in campaign strategy and planning, mobilisation, logistics and election management.
The success of the general election therefore rests on your effectiveness and commitment.
The Election Management Committee will be assisted by eleven (11) Directorates: namely Secretariat; Planning, Research and Strategy; Budget and Finance; Mobilisation; Transport and Logistics; Strategic Communications; Volunteer/Support Group; Legal; Information and Technology; Religious; Ethnic Nationalities; Women; Youth & Student Affairs; Security; Organising; as well as Special Duties.
The divisions, sub-divisions and assignment of responsibilities will be made known to you by the Director General. Please note that your role is to execute this election management with and aid from the Party State Secretariat. I have no doubt that you will take your assignments very seriously.
Let me assure our members and other critical stakeholders who are listed here, that we will try as much as possible to accommodate all stakeholders in the sub-committees, since we cannot accommodate everyone in the main Campaign Committee.
The Campaign Committee (EMB) Term of Reference:
Implement the EPP Report, prepare all elements of the party, including candidates’ Campaign activity coordination; Develop Campaign schedule with Timelines including the political environment, strategy, narrative, and execution; Interpret & implement the:Electoral Act 2022INEC Regulations for 2023 General Election INEC Guidelines Other Extant Laws; Implement strategic internal, social, and opportunities facing the Party in the next election.
The campaign is headed by the Governor and ably assisted by an advisory Council and management Committee and directorates as follows.
May I now read out the names of the members of the State Election Management Committee.
Hon. Pastor Cornelius O. Ojelabi
State Chairman