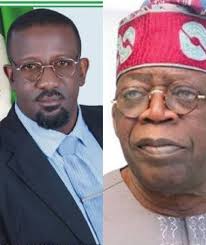 Posted By: The Gazelle NewsIn: News, PoliticsNo Comments
Print Email
The 2023 governorship aspirant of the Peoples Democratic Party (PDP) in Enugu State, Denge Onoh, has taken a swipe at the critics of Senator Chimaroke Nnamani of Enugu and Rivers Governor Nysome Wike, stating the duo was right to associate with the All Progressives Congress (APC) and its Presidential Candidate, Asiwaju Bola Tinubu.
Onoh, who openly canvassed support for Tinubu despite his affiliation with the PDP, was reacting to the criticism that trailed Nnamani, who declared Tinubu is more than fit to contest the Presidency.
He told newsmen in Enugu on Wednesday, 10 August, 2022, that Nnamani was bold to state the fact that politics is not about suppressing accuracies but about stating the obvious footprints of statesmen who have made contributions in their societies.
Onoh said: “Chimaroke Nnamani has given the South east a first class view and information based on facts about the Man, Bola Tinubu. It’s sad to see all forms of political accusations painting Asiwaju bad, but like in the words of the Rivers State Governor, ‘e go de pain dem, we go de go’ and I can assure people that Asiwaju is as fit as a bull. The only ailment Asiwaju is suffering at the moment is his impatience for us to go to the field where he will get a resounding victory.’’
In the case of Governor Wike and his battle with some PDP stalwarts, Onoh charged the laymen in PDP to pull from the deceiving leaders of the party and stop attacks on Governor Wike for inviting his fellow Governors, irrespective of political party affiliations, to commission projects in Rivers State.
“Those criticising Wike are just afraid of their shadows. Governor Wike sits in the position of honour and should not be misconstrued to mean that he is a bitter loser.
‘’These critics of Wike should all remember that it was all agreed, including all the Governors of Southern Nigeria, that the next President of Nigeria should come from the south, whether in the PDP or in the APC, but behold our own party the PDP goofed while the APC got it right. So how do you blame Wike for this tragic failure of the PDP?
“It was based on that agreement that Wike went ahead and ran for the Presidency in his party, the PDP, irrespective of the sad betrayals that occurred in the field during the presidential primaries.
”If a southern presidential candidate had emerged in the PDP aside Wike, I am certain that the Rivers Governor would have cued behind such a southern candidate.
“We all know that Governor Wike was betrayed in the field by those he defended with his honour and made enemies on their behalf in 2019 and today those beneficiaries now turned vocalist and go against the southern agreement.  The Apc governors showed great statesmanship and insisted that power must go to the south and all northern Aspirants stepped down or withdrew from the race and history will forever be kind to them.
“Wike’s present position is a position based on principle and not on selfish interest as the bad elements in the PDP have tried in vain to portray the Rivers governor. For the fact that the PDP failed to field a southern presidential candidate is enough problem in the party, and so any support for any southern president is statesmanship and in line with an established agreement entered into at Asaba, Enugu and Lagos, respectively. So as far as I’m concerned nobody should crucify Wike for abiding by an agreement. A Latin word ‘pactum quod pactum est’ An agreement is an agreement.
“Finally, come rain come shine we stand by a southern presidential candidate and whoever maliciously wishes Jagaban ill health shall embrace such wish upon himself,” Onoh stated.

Director To Spend 20 Years In Prison For N10.1m Scam In Sokoto