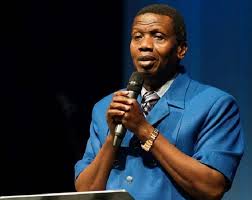 Posted By: The Gazelle NewsIn: News, ReligionNo Comments
Print Email
The General Overseer of the Redeemed Christian Church of God (RCCG), Pastor Enoch Adeboye, on Friday, criticised the planned redesign of the N200, N500, and N1,000 banknotes by the Central Bank of Nigeria (CBN).
The revered cleric expressed displeasure that the Federal Government is concerned with the redesigning of naira notes despite the falling value of the national currency.
Adeboye, who spoke during the church’s November Holy Ghost Service with the theme, ‘Let It Rain’, also said the naira does not even worth the paper it is printed on as people cannot afford to feed.
“You know what’s going on in our country. It doesn’t even make sense anymore. Our naira now is not even worth the paper it is printed on,” the octogenarian said at the programme held at RCCG’s international headquarters along the Lagos-Ibadan Expressway.
“And while people are hungry, trying to find enough money to buy bread to eat, our bosses are thinking of making the naira more beautiful, even if it can’t buy bread, at least, it will look beautiful. Oh Lord, have mercy,” he said.
According to him, things have become funnier in Nigeria. “We have problems in the land now. Things seem to be getting funnier and funnier. If you don’t learn to laugh in Nigeria now, you will develop hypertension,” the cleric stated.
‘God Hasn’t Told Me Anything About 2023 Elections’
Adeboye further said God has not told him yet whether there will be an election in Nigeria next year or not.
“Do you know that up till now, and this is November, up till now, Daddy (God) hasn’t told me yet that there is going to be an election next year?
“We continue of course as if there is going to be. I am saying that Adeboye, I am not talking of other people, God has not told me yet. The yet must be in capital (letters). He may tell me tomorrow; I don’t know but as of this moment, he hasn’t told whether or not there will be an election next year,” he said.
“I am not trying to frighten you. I am not a prophet, I am just a pastor,” he added.
The cleric reiterated that he will pray for any politician who comes to him for prayer, saying his duty is to pray but only God answers.
He subsequently announced a fast and prayer for the nation between November 26 and December 2, 2022.
“We will praise God for His patience over us and over our nation. Then, we will confess our sins, the sins of all of us who are called Christians…And then prayer point number three, we will ask Him (God) for mercy,” Adeboye said.

US Donates $6.8m To Combat Human Trafficking In Nigeria

Woman Loses Hubby To Housegirl After Covid-19 Forced Her To Stay In Dubai For 5 Months; Maid Delivers Baby For Husband

#EndSARS Protest: UN Calls For Implementation Of Recommendations Of Panel Of Inquiry