Oyebanji On ‘Thank You’ Tour Of LGAs, Seeks Stakeholders’ Cooperation

By The Gazelle NewsJuly 20, 2022No Comments3 Mins Read 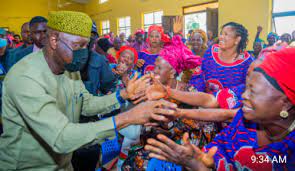 Share
Facebook Twitter LinkedIn Pinterest Email
Ekiti State Governor-elect, Mr Biodun Abayomi Oyebanji, has said he would run an inclusive government and give equal opportunity to all Ekiti indigenes, regardless of political leanings and background.
Oyebanji stated this on Monday, 18 July, 2022 during  his ‘thank you tour’ in Ikole, Oye and Ilejemeje local  government areas, where he met traditional rulers, party leaders and other stakeholders and shared some of his plans and programmes for the state.
The Governor-elect who was accompanied by his Deputy, Chief (Mrs.) Monisade Christianah Afuye; State  Chairman of APC, Barr. Paul Omotoso and other party leaders, expressed his appreciation to the people for the support given to him and APC during the last election and promised not to betray the trust reposed in him.
“I made a promise during my campaign that if elected I would come back to thank you. In particular, I appreciate our traditional rulers for their support and prayers. I know the influence and power of the Kabiyesis and I’m aware that their good disposition towards me and our party helped us win many people to our side.
“To our party members and other people of Ekiti State, I thank you because you are truthful to yourselves, God and the generation yet unborn.
“As promised during my campaign, I still reaffirm here today that I will perform up to expectation. I will do everything humanly possible to make you proud”
Addressing traditional rulers in Ikole, Oye and Eda- Oniyo Ekiti, the Governor-Elect urged them to always call his attention, anytime they considered it necessary to offer advice on any lapses in his administration.
The Governor-elect
called on party members to be magnanimous in victory by reaching out to aggrieved members and intending members and integrating them into the progressive fold.
“I am pleading with our members to extend hand of love to those that are aggrieved and even new members ahead next year elections. he said.
Oyebanji also restated his earlier promise that  party leaders and various communities would have input whenever  appointments are to be made, adding that it would be difficult for anybody to sail through without endorsement from party and community leaders from his or her constituency.
“I promise you that you will be the one that will indicate those that will represent you. Anybody that wants appointment should go back to their leaders and get clearance and endorsement”
Speaking further, the Governor-elect assured the royal fathers that they would be accorded due recognition in his administration and won’t be left out in scheme of things.
The Oloye of Oye Ekiti, HRM Oba Michael Oluwole Ademolaju,  who spoke on behalf of all the  traditional rulers from the local government, described Oyebanji as a thoroughbred politician and astute administrator who is well prepared to consolidate on all the laudable achievements of Governor Kayode Fayemi administration.
While congratulating Oyebanji and Mrs Afuye on their electoral victory, he expressed optimism that the Governor-elect would perform up to expectation, adding that the gate to the palaces of all the traditional rulers in Ekiti would be wide opened for him anytime.
Earlier, Oyebanji had stopped at Ijesa-Isu with his entourage to visit a former Deputy Governor of the  state, Chief Paul Alabi, who served betwen 1999 and 2003.
The former Deputy Governor who expressed his delight over the visit, congratulated the governor-elect on his landslide victory and wished him success in his new endeavors.