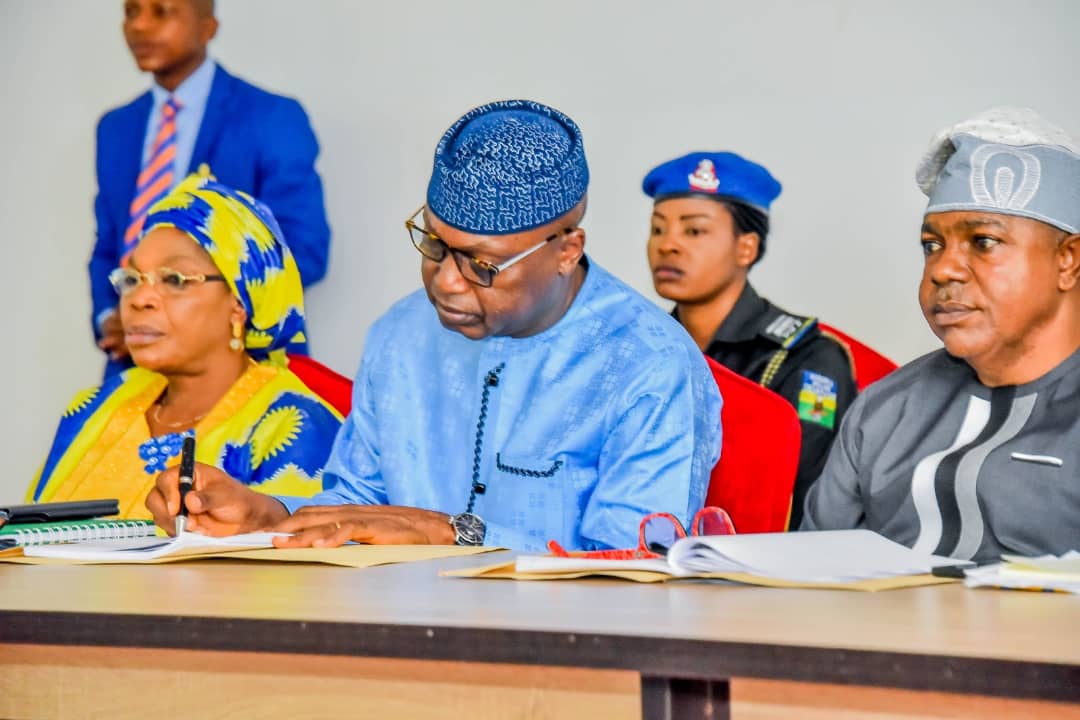 Posted By: The Gazelle NewsIn: NewsNo Comments
Print Email
Ekiti State Governor, Biodun Oyebanji has reiterated the commitment of his administration to extend the rehabilitation of roads to other towns in the State to ease human and vehicular movement.
Governor Oyebanji stated this on Wednesday during an  inspection of ongoing rehabilitation of major roads in Ado Ekiti, the State capital.
The Governor had, two weeks ago, directed the Ministry of Works and Transportation to commence comprehensive rehabilitation of roads starting with the State capital.
Governor Oyebanji, accompanied by the state Head of Service, Barr Bamidele Agbede; Director General Bureau of Public Procurement, O’Seun Odewale; officials of the state Ministry of Works and the contractors handling the projects, visited some of the projects in different parts of Ado- Ekiti, with residents hailing him for the intervention.
Speaking with journalists shortly after the inspection, Oyebanji said his visit was to ensure that the contractors handling the projects conform to specification and time frame as contained in the briefing he received from Ministry officials. He also expressed satisfaction on the quality of works done on the roads.
Emphasizing the importance of good roads to investors, the Governor disclosed that his administration has secured the commitment of Federal Government to fix the failed portions on federal roads in the State. This he said will open the State to more investors.
The Governor, who also visited the popular Oluyemi Kayode Stadium, reaffirmed his commitment to make sporting activities attractive to youths by creating an enabling environment for sports men and  women to excel.
Oyebanji who was conducted round the stadium by the General Manager, Ekiti State Sports Council, Mr Kunle Adeyemi, inspected the Gymnastic section, basketball and Volley ball courts and other sporting facilities.
“We commence the rehabilitation of Ado township road on our first day in office and what you are seeing now is just a little inspection to ensure that they conform to standard and speed in order to get value for our money.  It is my own way of ensuring that contractors conform to specification, so I want to see how far they have gone,
“I have received a lot of briefing from the ministry of work of official. I wanted to sure that the briefing I received is correct and I am impressed with how far they have gone.
“The benefit is to ease transportation and to ease movement of people, good and services in Ekiti State.  You will recall that investors will look for states that are ready for investment and road transportation is one of the criteria they consider.  Once we finish Ado township roads, we have commitment from federal government to repair federal roads in the State, so we move to other local government areas. We are just starting with Ado because Ado is the State capital this gesture will be extended to other local government.”
One of the road users who spoke with Journalists at Okeyinmi, Mrs Funmilayo Adebanji expressed delight at the visit of the Governor to the place, describing the friendly disposition of the governor to the people on the street as a welcome development.