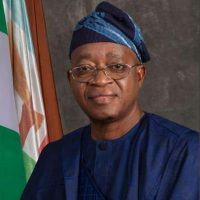 This was made known at plenary sitting of the Osun State House of Assembly presided over by the Speaker, Timothy Owo eye, on Tuesday, 21 July, 2020.

The Speaker said the Governor’s request is pursuant to Sections 5(2) and 13(1) of the State of Osun Security Network Agency and Amotekun Corps Establishment Law 2020.

The House of Assembly had on 7th July suspended plenary for two weeks in other to allow fumigation and disinfection of the Assembly complex.

The Speaker who read the Governor’s letter upon resumption, directed the nominees to submit 35 copies of their resume to the Assembly within 24hours.

The nominees are expected to appear at Thursday’s plenary by 11am for screening.

The Osun Security Network Agency (Amotekun) 2020 Bill was passed by the State House of Assembly on 3rd March and assented by Governor Gboyega Oyetola on the 13th March, 2020.

Ivie: Opa Williams Returns With A Bang, Campaigns Against Rape With ‘Ivie’