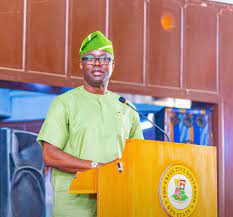 Oyo State Governor, ‘Seyi Makinde, on Thursday, 17 November, 2022, said that his administration will continue to collaborate with development partners and the private sector to promote economic growth.

The Governor, who stated this while receiving the British Deputy High Commissioner, Ben Llewellyn -Jones, who paid him a courtesy  visit at the Governor’s Office, Agodi, Ibadan, added that government alone cannot develop the state’s economy.
He said: “For us in Oyo State, we recognise the fact that government  alone cannot sort out the challenges with us.
“I am glad to have you here to also discuss business opportunities. “We have to look at development partners, which is a big part of what we are doing. We also encourage private participation.

“This afternoon, we will be flagging off a project on gas infrastructure, in collaboration with Shell Nigeria Gas.

“I know of an administration that tried to carry out same project using government resources but it failed. Now, if you have a business case where the private people can come in to invest, definitely such a project will be a go.
“So, we are always happy to sit down to discuss opportunities with development partners and the private people.”
Earlier, the British Deputy High Commissioner, Ben Llewellyn -Jones, had told the governor that the essence of the meeting was to talk about some areas his country and Oyo State can collaborate for development.
He said: “Thank you your Excellency for making time to see me. I know how busy you are.
“It is my sixth year in Nigerian and third in Lagos. My role is to promote  UK trade, investment and economic growth across Nigeria.
“I have come to see your Excellency to talk about some of the possibilities here in Oyo state.”
He also said that his team will be meeting British Companies as well as officials of the International Institute for Tropical Agriculture (IITA) and will also  spend some time to discuss partnerships with the University of Ibadan.
The event had in attendance, the Head of Prosperity, British Deputy High Commission, Kris Camponi; Senior Political Adviser, Wale Adebajo; Secretary to State Government, Mrs Olubamiwo Adeosun, Chief of Staff, Hon Segun Ogunwuyi, Head of Service, Alhaja Ololade Agboola, Commissioner for Agriculture and Rural Development, Hon Adeniyi Adebisi  among others.

LAGFERRY MD, Balogun, Speaks On How, Why Water Transportation Is Gaining Ground In Lagos

Tunde Odesola on Monday: Buhari: Our President, Their Patient