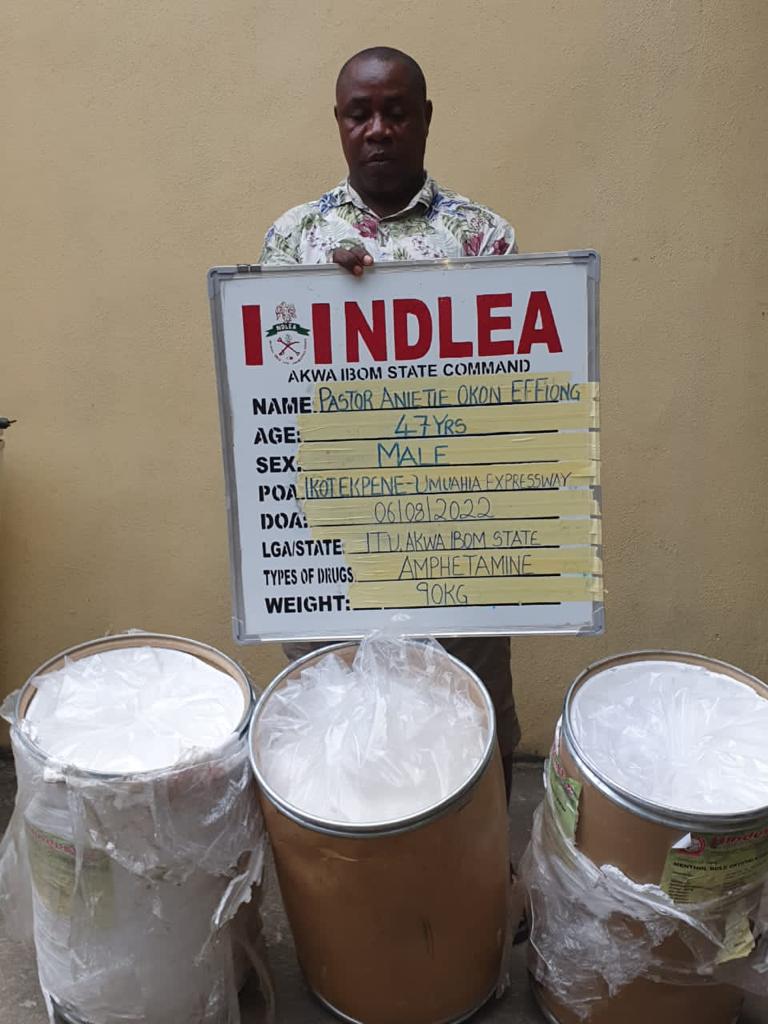 Posted By: The Gazelle NewsIn: NewsNo Comments
Print Email
The National Drug Law Enforcement Agency (NDLEA) said it has arrested a pastor, Anietie Effiong with three drums of crystal methamphetamine, locally called Mkpuru Mmiri, believed to have been imported from India.
A statement on Sunday by the spokesman of the anti-narcotics agency, Femi Babafemi said: “A trans-border drug dealer, Pastor Anietie Okon Effiong has been arrested by operatives of the National Drug Law Enforcement Agency, NDLEA, with three drums of crystal methamphetamine, locally called Mkpuru Mmiri, believed to have been imported from India.”
He revealed that the consignment weighing 90 kilogrammes and loaded into a commercial bus with registration number RSH 691XC at Ojuelegba in Lagos was intercepted during a stop and search operation along Umuahia – Ikot Ekpene highway last Saturday.
According to him, the dangerous drug packed 30kg in each drum was meant for Pastor Effiong, who was arrested in a follow up operation at Oron beach in Oron, noting that the recovered Meth drums were meant for onward delivery to neighbouring Republic of Cameroon.
The latest clampdown is coming on the heels of four seizures of the same illicit substance weighing 4.074 kilogrammes going to Australia, Indonesia and Philippines with a 3 kilogrammes cannabis sativa heading to Dubai, United Arab Emirates at some courier companies in Lagos. The consignments were concealed in body cream, hot burner iron and beads.
Meanwhile, in Sokoto, a 90-year-old retired soldier, Usman Adamu was arrested last Wednesday in Mailalle, Sabon Birni LGA for supplying bandits illicit drugs. At the time of his arrest, the suspect was caught with 5.1 kilogrammes cannabis sativa.
At the Murtala Muhammed International Airport, Lagos, a 37-year-old
Nigerian resident in Italy; Solo Osamede was arrested for ingesting 41 wraps of heroin. He was nabbed and taken into custody for excretion while attempting to board a Turkish Airline flight to Milan, Italy via Istanbul, Turkey on Saturday 30th July.
According to Babafemi, the swallowed wraps of the illicit drug were recovered in four excretions, which the suspect completed on Monday 1st August.
In the same vein, a female passenger Jatau  Lami was arrested at the Lagos airport for attempting to export 1,700 tablets of tramadol 225mg concealed in her luggage to Istanbul, Turkey via a Turkish Airline flight on Sunday 31st July.
He said preliminary investigation revealed that the suspect, a mother of three lives in Istanbul, Turkey with her family. She blamed her action on pressure to raise N5 million ransom to free her mother from the captivity of bandits who kidnapped her since June.
Also at the SAHCO export shed of the airport, attempts by some freight agents to export two consignments of cannabis in a consolidated cargo to Dubai, UAE last Thursday were thwarted by NDLEA operatives who have arrested two of them in follow up operations. They are: Oladipupo  Fatai and Animashaun Qudus, while two others are still at large.
In Zamfara, NDLEA operatives last Thursday intercepted a truck from Benin, Edo state enroute Sokoto with 50,000 tablets of diazepam owned by a drug dealer, Umaru Attahiru, while in Kogi, 14 sacks containing 1,376 bottles of codeine based syrup weighing 190.4 kilogrammes were seized along Okene-Abuja highway last Wednesday. The exhibits were found in a delivery bus coming from Onitsha, Anambra and heading to Abuja. Follow up operation in Abuja same day led to the arrest of Jude Ikenna and Ozoemene Cornelius.
In Kaduna, four suspects: Sulaiman Rabi’u; Sanusi Sha’aibu; Ma’aruf Habibu and Christian Nnachor, were arrested in Zaria, Tafa and Romi Kaduna with 106, 770 tablets of tramadol 225mg, diazepam, Exol-5 and 100 bottles of codeine cough syrup.
In Enugu, 143.5 kilogrammes cannabis sativa was recovered from locked up stores in new market area of the state capital last, while in Delta, a suspect, Ike Okparachi, 42, was arrested at Abraka Junction, Asaba with 10,550 tablets of tramadol 225mg; Swinol; Rohypnol; and 3,105 bottles of codeine syrup as well as 69grams of Molly.
Meanwhile, the Chairman/Chief Executive of NDLEA, Brig. Gen. Buba Marwa (Retd) has commended the officers and men of the Akwa Ibom, MMIA, Sokoto, Zamfara, Kogi, Delta, Enugu, and Kaduna Commands of the agency as well as those of the Directorate of Operation and General Investigation, DOGI for their recent feats.
He however charged them and others across the country to remain focused and vigilant.