By The Gazelle NewsMarch 9, 2022No Comments3 Mins Read 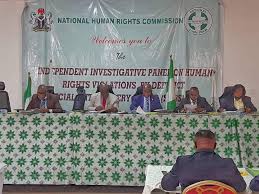 Share
Facebook Twitter LinkedIn Pinterest Email
A complainant, Michael Uzoagba has demanded a compensation of N115 million from Nigerian Police for his alleged unlawful arrest, detention and property seizure in 2018.
Uzoagba, made a plead for the compensation on Tuesday at the  Independent Investigation Panel on Human Rights Violations by the defunct SARS and other units of the Nigerian Police sitting in Abuja.
The petitioner who was led in his testimonies by his counsel, Ohiovor Maria of the Legal Aids Council of Nigeria informed the panel that his wares including refrigerator, televisions sets, electric iron etc were on two occasions carted away by the Police in Bwari, Federal Capital Territory.
He said he wants compensation against the Police as follows; N100 million for general damages, N10 million for unlawful arrest and detention for three days and N5 million for malicious prosecution.
In his narration before the panel presided over by Dr.Garba Tetengi, who stood in for the Chairman, Justice Suleiman Galadima (rtd), Uzoagba told the panel that on the fateful day, while he was in his shop, he saw five policemen asking him the whereabouts of his son.
According to him, he replied the police team that he did not know where his son was at that time, only for them to start picking his electronics and electrical appliances he displayed in his shop for sale and packing them into their own standby vehicle.
Before moving the said items into the Police vehicle, he told the panel that Police team made a call presumably to the DPO of Bwari Police station and thereafter, they went ahead with the removal of the electrical appliances. He said he queried the operation and no answer was given to him to justify the action.
He said apparently not knowing what to do to recover the items from the Police, he informed the panel that he went to Radio House and lodged a complaint with respect to the said seizure of his properties by the Police.
He lamented that despite the intervention by the Radio House, the Police have allegedly refused to release the said goods but rather instituted a court case against him for daring to take the Police to the Radio House.
Asked by the Acting Chairman, Tetengi to state the value of the entire property allegedly taken by the Police and what he wants the panel to do for him in the circumstance, the petitioner put the value at over N10 million and that he wants the panel to help him and recover the said items from the Police.
In their response, the Police represented in the matter by Fidelis Ogwobe told the panel that he needed more time to contact the police officers listed as respondents in the case to enable him put up a defense for the Police.
Respondents in the petition are Makinde Ola, DPO Bwari Police station FCT, Shunku Terhermber, Bwari Police station FCT, Commissioner of Police FCT and Inspector General of Police.
The case was adjourned till 21st March, 2022 for cross-examination of the petitioner.