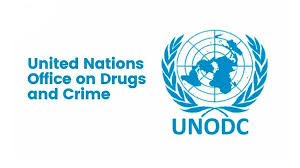 Posted By: The Gazelle NewsIn: News, SecurityNo Comments
Print Email
A state-of-the-art Secure Evidence Storage Facility would soon be at the disposal of the Nigeria Police Force courtesy of the United Nations Office on Drugs and Crime (UNODC) with funding from the United States Department of State’s Bureau of International Narcotics and Law Enforcement Affairs (INL)
A statement on Wednesday, 15 June, 2022 by UNODC read: “Today, United Nations Office on Drugs and Crime with funding from the United States Department of State’s Bureau of International Narcotics and Law Enforcement Affairs (INL) commenced the groundbreaking ceremony to establish a state-of-the-art Secure Evidence Storage Facility at the Nigeria Police Force Criminal Investigation Division Headquarters in Garki, Abuja.”
According to the statement, the event kicks off a wide-ranging project funded by the US Department of State’s Bureau of International Narcotics and Law Enforcement Affairs (INL) to support the Nigeria Police Force (NPF) in the collection and forensic exploitation of physical evidence.
The statement said: “The initial focus of this project is on Federal Capital Territory and four states in the Northeast region, but it will soon also be extended to additional states in the North West and North Central regions.
“The project is being delivered by both Nigerian and international experts from UNODC, the UN’s lead agency on supporting law enforcement activity. The goal is to strengthen police efforts to apprehend terrorists, kidnappers, and other violent criminals, and ultimately to secure convictions within a rule of law framework. In addition to refurbishing several NPF evidence storage facilities, the project team will also work with Nigerian police investigators and crime scene specialists to build their capacity to collect and analyze evidence such as fingerprints, tool marks, digital data, ballistics, and biological material.”
In her remarks at the occasion, United States Ambassador to the Federal Republic of Nigeria, Mary Beth Leonard highlighted the importance of successfully prosecuting serious criminal offences, noting: “Evidence is key to the success of any investigation; Improper handling of evidence can have detrimental effects on establishing rule of law. The refurbishment of evidence facilities in seven north central and northeast states as well as the Criminal Investigation Division in the Federal Capital Territory will enhance the Nigeria Police Force’s ability to properly maintain the integrity of physical evidence in its care; and will lead to more evidence-based investigations and successful prosecution of terrorist groups and other serious crimes.”
The Chief of UNODC’s Terrorism Prevention Branch, Masood Karimipour, added: “Solving crimes requires skill, painstaking investigation, science and patience. This project aims to help the Nigeria Police Force recover forensic evidence of crime and terrorism, to exploit these clues to identify and prosecute suspects, and to help prosecutors present stronger cases in court, in line with international standards.”
Commissioner of Police Tony Olofu, representing the IGP, said: “I want to thank UNODC and the US for their most welcome support and sincerely impress on them both that they can embrace us as a willing partner in the fight against terrorism and other heinous crimes.”
The launch event was also attended by a wide range of key partners in this effort, including representatives from the Federal Ministry of Justice, the Legal Aid Council of Nigeria, and the Office of the National Security Adviser, who all delivered goodwill messages supporting this initiative.
The statement said: “UNODC’s Strategic Vision for Nigeria takes our partnership with the government of Nigeria to a new level in our shared mission to tackle crime, drugs, terrorism and corruption and their effects on the economy, environment, and people.”