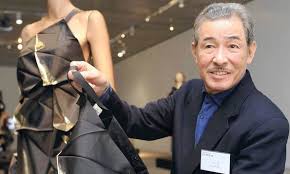 Posted By: The Gazelle NewsIn: NewsNo Comments
Print Email
His company announced his demise after he succumbed to liver cancer on Friday, and a private funeral has already taken place, Japanese media report.
Known for his innovative styles and perfume, Miyake built a global fashion brand, which included designing Steve Jobs’ famous black turtleneck jumpers.
Miyake was known to work with traditional and modern fashion techniques during his long career.
Miyake reportedly wanted to be a dancer or athlete when he was young – but that changed after he read his sister’s fashion magazines.
He studied graphic design at a Tokyo art university and then moved to Paris in the 1960s, where he worked with lauded fashion designers Guy Laroche and Hubert de Givenchy.
He moved to New York for a short time, before heading back to Tokyo in 1970 to open the Miyake Design Studio.
By the 1980s he was celebrated as one of the world’s most pioneering designers as he worked with materials from plastic to metal – and also traditional Japanese materials, and paper.
His fashion house developed highly sought-after clothes for men and women, as well as bags, watches and perfumes – a bottle of L’Eau d’Issey, launched in 1992, was rumoured to sell every 14 seconds.