By The Gazelle NewsNovember 11, 2022No Comments2 Mins Read 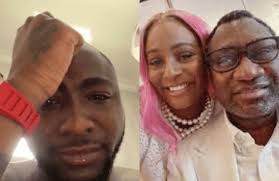 Share
Facebook Twitter LinkedIn Pinterest Email
Music sensation, Davido has postponed his anticipated Away festival A.W.A.Y, which is slated to take place at the State Farm Arena in Atlanta, Georgia on November 18, 2022.
His management released a statement on Wednesday night postponing his Away festival.
According to the statement, Davido desires to spend time with his family and loved ones during these difficult times.
The statement reads:
“We have made the difficult but necessary decision to postpone A.W.A.Y Festival until Saturday, November 18, 2023. It is necessary for Davido to spend time with his family and loved ones at this time.
To all ticket buyers, your tickets will be honored for the 2023 date.
Thank you for understanding and we look forward to seeing you all in the near future”.
Recall that the singer had lost his beloved son, Ifeanyi on October 31st.
The singer also made a quick return to Instagram to delete posts and unfollow accounts, days after the death of his only son, Adeleke Ifeanyi.
According to reports, Davido upon his return, made some adjustments to his Instagram profile, as he allegedly unfollowed DJ Cuppy, and his billionaire father, Femi Otedola.
Davido who has 25.8 million followers on his verified Instagram page and followed 1,677 people before the death of his son made changes as he unfollowed three accounts from his followers.
Aside from this, Davido deleted all his pinned posts; he also deleted his anticipated festival post.
He had already invited artists that included: Kizz Daniel, Wande Coal, Lojay, Pheelz, Oxlade, BNXN (fka Buju), Focalistc, and Victory.