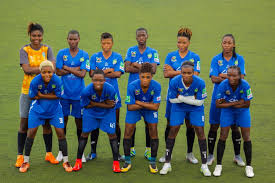 Posted By: The Gazelle NewsIn: News, SportsNo Comments
Print Email
Chairman and Chief Executive Officer of Winners Golden Chance Ventures Limited, Chief Idowu Obasa has commended the organizers for the success of this year’s BETWGB Lagos FA Cup finals.
Obasa was among the invited dignitaries that watched this year’s BET WGB/Lagos FA Cup Finals which were held on Sunday, 28 August, 2022, at the Onikan Stadium, Lagos Island.
In the female category final, FC Robo Queens humbled Dannaz Ladies 4-0, while Ottasolo lost 1-3 to Dannaz FC in the male category.
Speaking with journalists after the final, the founder of  BETWGB said this year’s FA Cup Finals have recorded a huge success and commended the organizers for the job well done.
He explained further that the finalists in both male and female categories did a fantastic job congratulating the winners for their historic feats.
“I am impressed with the organization, the attendance of football fans, as well as the finalists’ performance. This year’s Lagos FA Cup Finals have recorded a huge success in many areas and I congratulate the winners for the job well done,” he said.
In his own remark, the Vice President of the Nigeria Football Federation (NFF), Barrister, Seyi Akinwunmi also rated this year’s FA Cup as the best.
He said teams really gave a good account of themselves and congratulated the Organising Committee for working round the clock to ensure that this year’s edition had lived up to expectations.

In Pictures, Aregbesola At NCoS’ Senior Management Retreat In Sokoto