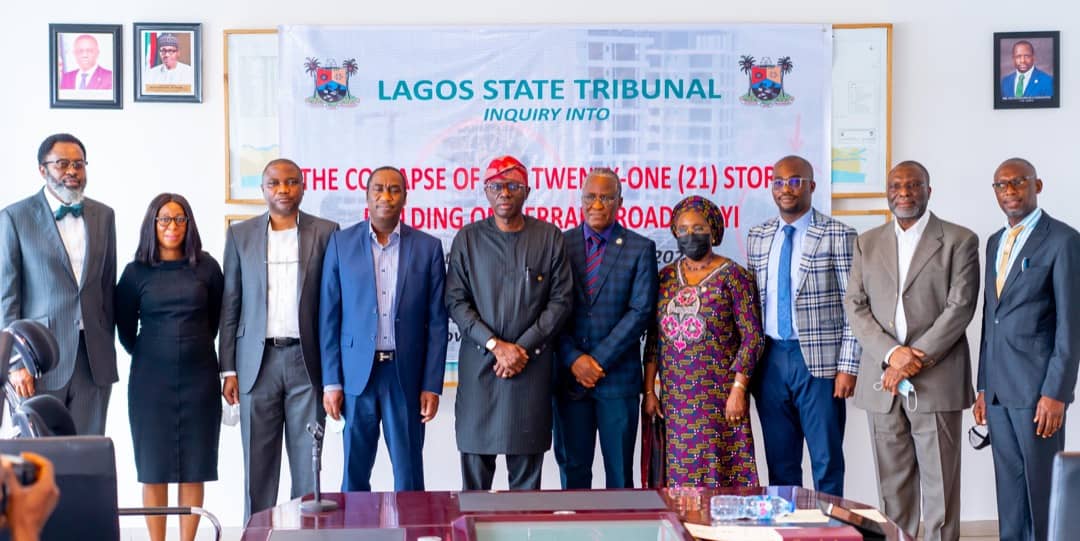 Lagos State Governor Babajide Sanwo-Olu, on Thursday, 4 November, 2021 inaugurated members of the investigation tribunal that will conduct an inquiry into the misconduct responsible for the collapse of a 21-storey structure on Gerrard Road in Ikoyi on Monday, 1 November, 2021. 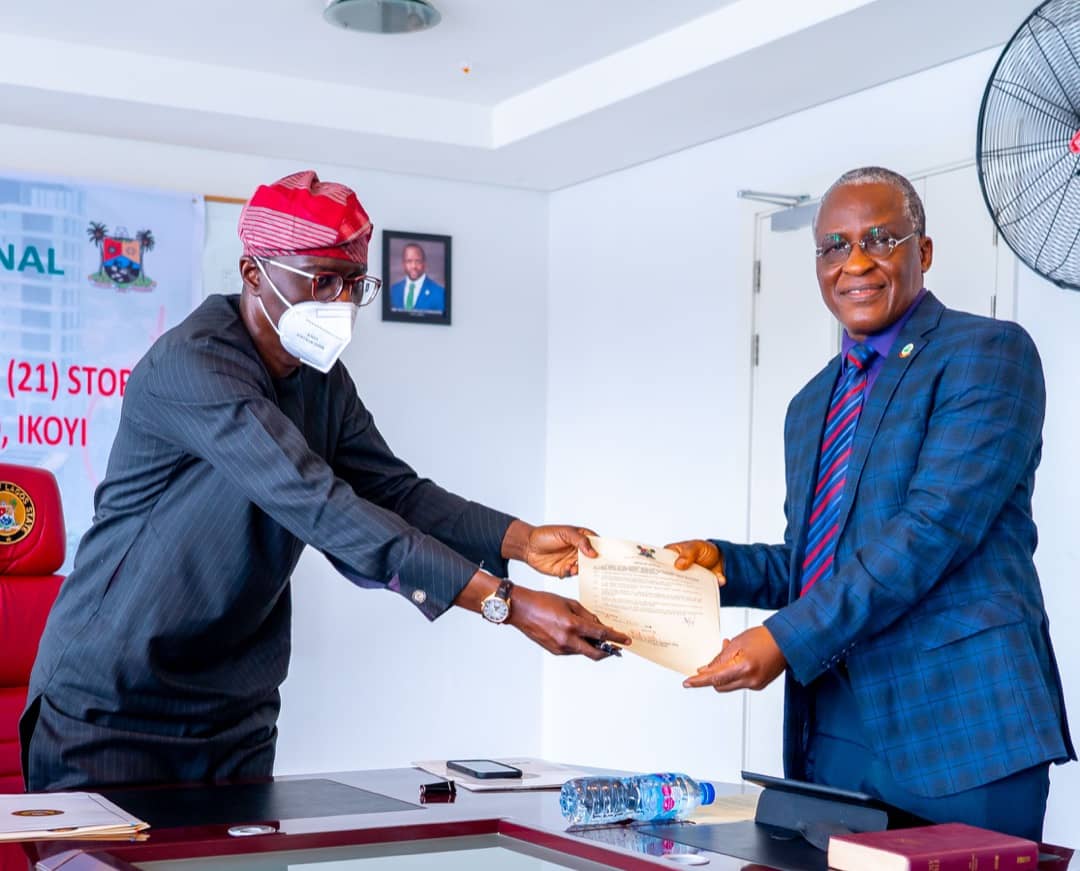 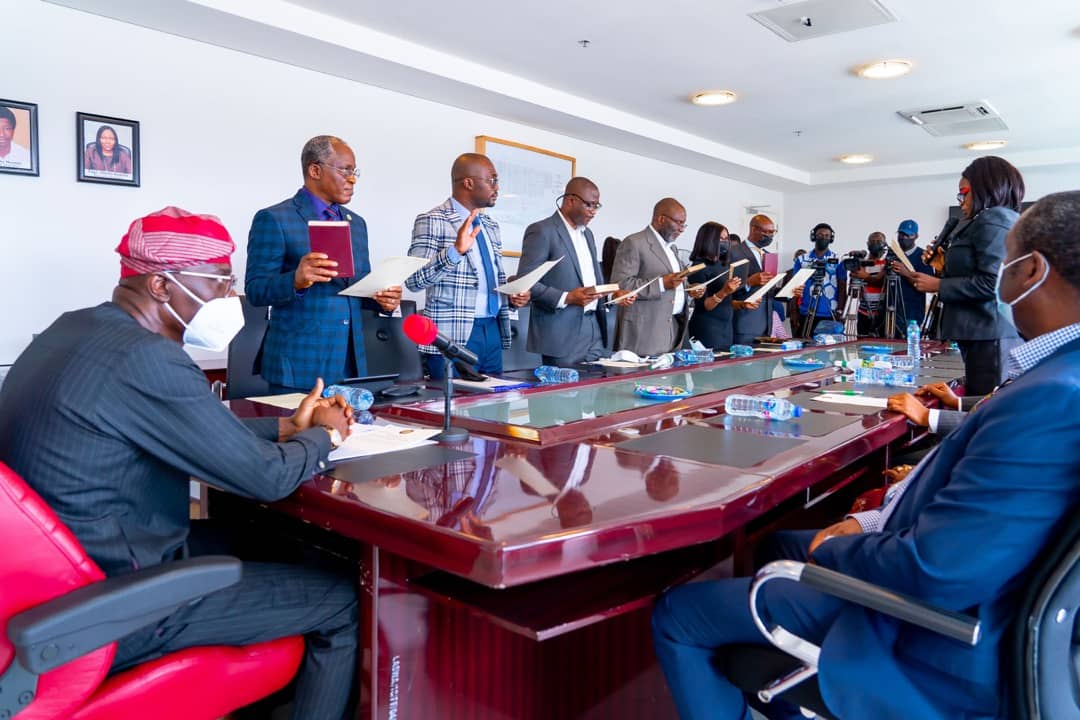 The Governor also signed the instrument legitimising the composition of the panel and empowering the tribunal to invite or summon anyone and organisation useful to the investigation.

Members of the tribunal, who are totally drawn from the private sector, took the oath at the event held in the LASWA Building at Falomo, Ikoyi. Their duty begins immediately and they are expected to report back within four weeks.

President of Nigeria Institute of Town Planners (NITP), Mr. Toyin Ayinde, is the chairman of the panel, while Ekundayo Onajobi, a lawyer in a private law firm, is the Secretary.

Sanwo-Olu, who described the event as a “sad one” for Lagos was visibly in a sombre mood during the inauguration.

The Governor said that the public deserved to know what went wrong. He stressed that the work of the panel would not bring back the lives lost, but added that it would help to prevent reoccurrence of such tragic events.

He said: “We are gathered here to perform a sad but necessary duty, which is the inauguration of a 6-member Panel of Inquiry into the collapse of the 21-storey building at Gerrard Road, Ikoyi, on Monday. It is a solemn moment for me personally, but this is an important assignment. Indeed, the generation coming after will not forgive us if we don’t do the right thing on this incident.

“The inauguration of this panel shows sincerely that the State Government is interested in unravelling and get to the root cause of what happened to the building, so that everyone concerned, including the Government, will learn from the very unfortunate incident. Lagosians and the world will be watching and waiting keenly, with the full expectation that the immediate and remote causes of this tragedy will be uncovered.”

Sanwo-Olu identified with distraught families of victims trapped under the collapsed structure, expressing the belief that the outcome of the investigation would assuage their pains and worries.

The oath taken by the tribunal members, the Governor said, empowers them with adequate privileges of Government powers to conduct independent investigation without fear, favour, interference and restrictions.

The Governor believed the tribunal members would bring their expertise and professionalism to bear in unravelling the infractions that brought down the building.

“What this tribunal will be doing over the course of the next few weeks will have important implications for building safety and for emergency response, not just in Lagos, but in the entire country. It will also go a long way towards ensuring that the families of the innocent victims of this avoidable tragedy experience some sort of closure and get justice,” Sanwo-Olu said.

Ayinde said Lagos was in its “dark period”, given the record of fatalities from the site of the building collapse.

He pledged on behalf of members to discharge the duty with all sense of responsibility and in line with ethics.

“We accept at our own liberty and with humility the important assignment the State has placed before us. We will go ahead with a sense of dedicated responsibility. This exercise can only make the expected difference if we all agree to place value on Nigerian life. As members, we promise to be guided by professional standards and hope that we will chart a new course that will guarantee the safety of lives of Nigeria citizens,” Ayinde said.