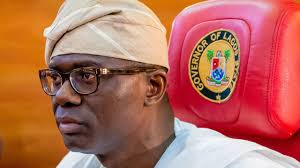 He said the Gbagada Estate, which is expected to be commissioned later this year was named after Rear Admiral Ndubuisi Kanu, to demonstrate to others that Lagos State will never forget her heroes.

“It is our hope that every time outstanding and heroic leadership is recognised and rewarded, new leaders will be inspired to emerge and continue from where the departing generation left off,” he said.

Speaking during a Day of Tributes in honour of Rear Admiral Ndubuisi Kanu organised by the Lagos State Government at the Blue Roof, LTV Complex, Agidingbi, Ikeja, Governor Sanwo-Olu described the deceased as “a most visionary and courageous Governor of our dear Lagos State” and an “Outstanding Nigerian.”

Governor Sanwo-Olu said Admiral Kanu, in his service as Military Governor of Lagos State, between 1977 and 1978, “was one of those who laid the foundation of modern Lagos; a foundation that his successors have been proud to inherit and build upon.”

He said Nigerians owe Rear Admiral Ndubuisi Kanu and other NADECO comrades gratitude for their selfless and tireless struggle for the entrenchment of democratic system of government in Nigeria.

In his welcome address, Lagos State Deputy Governor, Dr. Obafemi Hamzat, described the late Kanu as a man who played his role well and had impact in the lives of Nigerians, worked towards the unity and fought for the actualisation of democracy in Nigeria as well as an achiever who lived and died for the good of the people.

He said: “The late Admiral Kanu, a tested nationalist, lived his life for the good of the people. He loved the people and was always willing to make them happy.

“A dependable and trustworthy comrade, he lived a contented life, devoid of avarice and unbridled pursuit of personal wealth.

“He loathed injustice as a plague. A pro-democracy activist, he detested oppression and was at the forefront of the battle against military dictatorship between 1993 and 1999.”

The National Leader of the All Progressives Congress, Asiwaju Bola Tinubu, described the late Kanu as a patriot and partner in the struggle for democracy and enthronement of true federalism in Nigeria.

Tinubu, the former Governor of Lagos State, who was represented by his deputy, Otunba Femi Pedro said late Kanu is “a rare breed in his consistent and unwavering commitment to social justice, democracy and workable federalism in Nigeria” adding that “Admiral Kanu was a Lagosian, true Nigeria nationalist in the very true sense of that phrase.”

Tinubu also said “In everything that he (Kanu) did, from his work as former administrator of Lagos State to the sacrifices he made to help NADECO during the struggle for the actualisation of June 12, Rear Admiral Kanu was highly principled. He provided democratic vision and meaningful ideas to advance historic struggle.”

The Day of Tributes was also attended by the Governor’s wife, Dr. Ibijoke Sanwo-Olu, former Governors and Deputy Governors, members of the Lagos State Executive Council, serving and retired Military officers, NADECO chieftains, family members of the deceased, representatives of Christians Association of Nigeria (CAN), ethnic groups, among others.

Kanu, a retired Naval Officer, former Military Governor of old Imo State and former member of the Supreme Military Council (the highest decision-making organ of the then military government), who hailed from Ovim Village in Abia State, died on Wednesday, January 12, 2021 at the age of 78.

He Invited Me To His Office, Kissed Me On My Lips, Female Student Narrates How 62-yr-old School Proprietor Sexually Assaulted Her