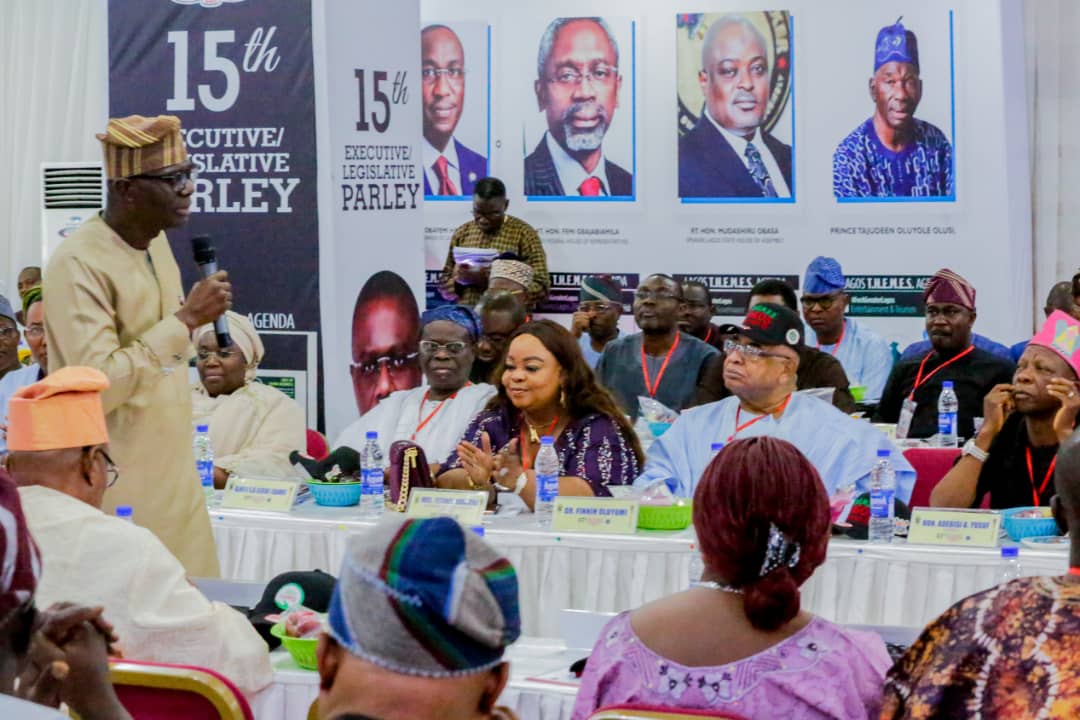 Lagos Governor, Mr. Babajide Sanwo-Olu, has called on all elected public officials in the State to close ranks and leverage partnership in order to enhance quality of governance and raise the bar of service delivery to the people.

Achieving his administration’s ’Greater Lagos’ agenda, the Governor said, is predicated on creating a responsive public service that would serve the interest of the people and bring about purposeful development.

The Governor said those elected and appointed in public offices must resolve to collaborate and maintain harmonious relationships in the discharge of their duties. Without collaboration, he said, public officers may not achieve much in delivering dividends of democracy to the people.

Sanwo-Olu spoke while declaring discussions open at the 15th Executive and Legislative Parley organised by the Lagos State Government.

All members of the National Assembly from Lagos, House of Assembly, State’s Executive Council and Governor’s Advisory Council (GAC) are attending the two-day event holding at Orchid Hotels in Lekki, with the theme: Harmonious relationship among various arms of government: A necessity for a Greater Lagos.

The Governor said the parley was to foster good working relationships between members of the executive and legislature, stressing that disharmony among officials of the two arms of government would rob the people of good governance and social development.

He said: “What we are seeking to achieve with this parley is to have harmonious relationship among ourselves, because each and every one of us are stakeholders in the conversation for a Greater Lagos. We have been having serious conversations on our campaign promises. We will review all we have done and judge all together.

“We will also have objective criticism and analysis of how government and governance have been in Lagos. We will discuss how we can strengthen collaboration between the executive and legislative arms to ensure we realise our aims of creating Lagos that we will all be proud of. At end of the day, we will have better understanding of our roles and contributions.”

Sanwo-Olu said although roles and responsibilities of each participants differ, the readiness of each public officer to open discussion on collaboration would enhance quality of representation in government and make governance process less cumbersome.

At the end of the parley, Sanwo-Olu said he believed all participants would attend to their duties with renewed commitment and motivation for improved service delivery

He said: “This event also presents an opportunity for our political party to remind us of the promises we have in our manifesto and we are working to achieve them. The beauty of this is that, all of us would be better enriched, geared and motivated to work and deliver all the dividends of democracy, whether at the representational level or execution level.

“We will continue to foster good working relationship and understanding for everyone of us to play our roles in the governance of Lagos and achieve Greater Lagos we keep talking about.”

Speaker of the House of Representatives, Rt. Hon. Femi Gbajabiamila, said no meaningful progress would be achieved in a society where the executive and legislature are locked up in disagreements.

The Speaker, however, called for more collaborations among Lagos public office holders, saying the executive and legislature must forge a common purpose in bringing development without each arm compromising on its roles.

He said: “There is a great progress to be achieved if members of legislature have the full cooperation of the executive in carrying their oversight. Legislators must work in partnership with the executive, whether they are in the same party or not.

“Being elected on behalf of the people is to fulfil a partnership. Individuals in public offices must fulfil these roles in the best interests of people and ensure that the partnership did not fail. Legislative oversight should be viewed as an attempt to usurp the powers of the executive.”

Speaker of the State Assembly, Rt. Hon, Mudashir Obasa, said the platform would create an opportunity for members of the State cabinet and lawmakers to share information on several grey areas and enhance quality of service.

Chairman, All Progressives Congress (APC), Lagos Chapter, Hon. Tunde Balogun, observed the yearly event had helped the party to assess the process of delivering its campaign promises to the people.

In Pictures, Rousing Reception For Saraki In Kogi State