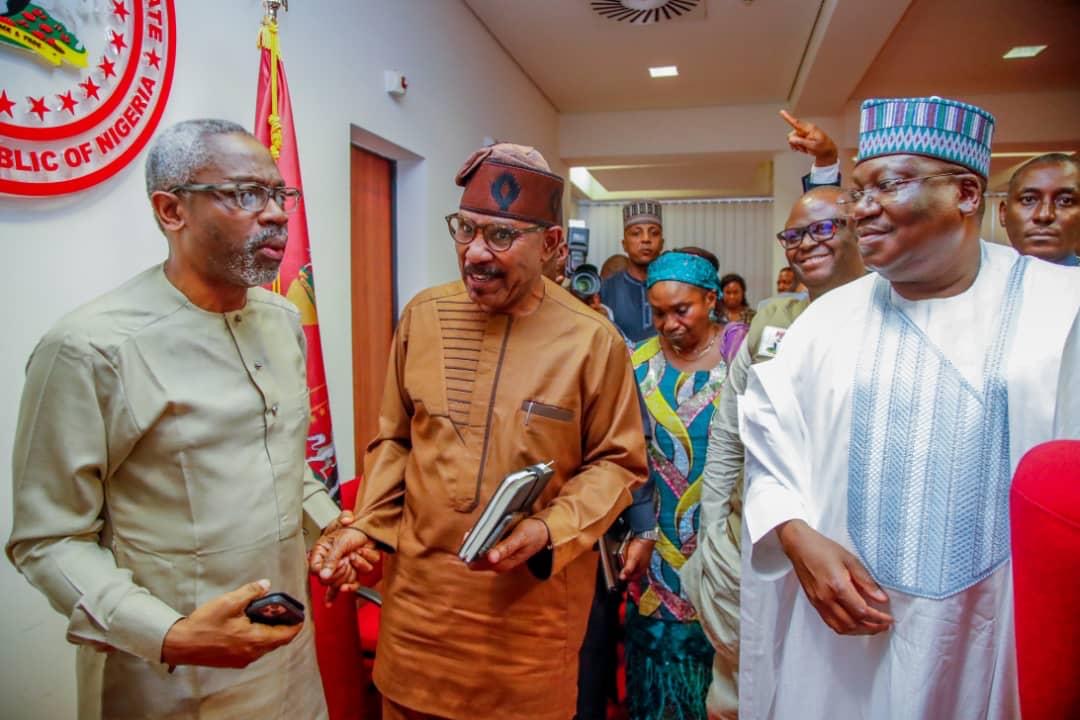 Posted By: The Gazelle NewsIn: No Comments
Print Email
President of the Senate, Ahmad Lawan, on Tuesday, 3 March, 2020, inaugurated a Joint Committee of the National Assembly and the Executive to ensure seamless passage of bills into law.
The Speaker of the House of Representatives, Rt. Hon. Femi Gbajabiamila and some other Federal lawmakers and Justice Minister, Abubakar Malami were at the inauguration of the committee.
Lawan said the purpose of the committee is for the ninth National Assembly to do things differently with respect to law making and with the participation of the executive arm of government.
“We believe the Constitution of the Federal Republic of Nigeria has given us joint responsibilities when law will be made for the good governance of our country.
“It is either a bill starts it’s journey from the executive side of government and comes to the Legislature before the assent or the legislature initiates the bill and of course the bill goes to the President for his assent.
“We have had some experiences that were not too good in the past when bills will be passed and of course, the executive would have some reasons not to assent to the bills.
“Or when bills would come from the executive arm of government and the Legislature will think otherwise. Maybe the gap was wide, the consultation was low and we believe we can do better when we encourage this kind of relationship and interaction,” Lawan said.
The Senate President said with this new arrangement, so much consultations between the Executive and the Legislature will precede the process of any Bill, be it an executive bill or private-member bill.
“We believe the interaction, the consultation will ensure that any possible grey areas in the bill that emanates from the executive will be addressed before the final form of that bill.
“The existence of this committee will not in any way take away that responsibility of the National Assembly to critically scrutinise anything that the Executive brings to the National Assembly.
“All we are trying to do is to ensure that we reduce the gap, that we create a platform for understanding, that we are able to pass laws much more easily and of course, make Nigeria a better place by so doing,” Lawan said.
Also speaking at the occasion, the Speaker of the House of Representatives, Rt. Hon. Femi Gbajabiamila stated that the committee is “more or less a clearing house for bills whichever direction they are coming from whether from the National Assembly or from the Executive.”
“So it is not to say that every bill that comes on the floor of the House will be passed. Neither is it to say that every bill that comes from the National Assembly will be assented to.
“The idea of this committee is to make sure that incidence like that…will be the exception and not the rule unlike what happened in the past,” Gbajabiamila said.
The Justice minister said the setting up of the joint committee was to re-establish and re-enact the collective resolve of the Executive and the Legislature which is aimed at the development of the country.
“Ever since the coming in place of the ninth Assembly, the Executive and the National Assembly have agreed, in principle and in action, to work together towards doing things differently in terms of promoting the national interest, bringing about legislations that will advance the interest of the nation…and indeed bringing about legislations that will turn around the fortune of this great country of ours.
“The intention is in no way about compromises. The desire is to work together in collaboration, in harmony by way of bringing about cross fertilisation of ideas that will translate to national development and create bilateral responsibility to the nation.
“So it is within this context that we collectively agree that there is need for harmony. There is need for collaboration. There is need for cross fertilisation of ideas for the purpose of enhancing w collective agenda as it relates to putting the interest of the nation first above any individual and parochial interest,” Malami said.
Members of the committee are the Senate Leader and House of Representatives leader, Senior Special Advisers to the President (Senate and House of Representatives), Clerk of the National Assembly, Director, Drafting, Federal Ministry of Justice and Director, Legal Drafting, National Assembly.
Others are Special Assistants to the Senate President and Speaker, Representative of the Chief of Staff to the President, Special Assistant to the President in Justice Reform and other relevant officials or technical partners that may be coopted as the need arises.