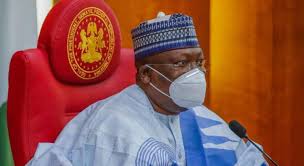 Posted By: The Gazelle NewsIn: NewsNo Comments
Print Email
The President of the Senate, Ahmad Lawan has appealed to government at all levels in the country to invest a lot more in public schools.
Lawan made the appeal in Abuja on Thursday, 24 November, 2022, in his opening remarks at the Grand Finale of the 7th edition of National Quiz Competition on the Legislature and Democracy for Senior Secondary Schools in Nigeria.
The event which involved both public and private schools across 30 states and the Federal Capital Territory was organised by the National Institute for Legislative and Democratic Studies( NILDS).
The Senate President observed at the commencement of the programme that held within the National Assembly complex that more private schools than public schools made it to the final of the competition.
He also noted that more female students than male students emerged as finalists in the competition.
Lawan said it was evident from his observation that “our private schools appear to be more successful and therefore can win and beat public schools silly.
“That is very significant for us. One, it is a wake up call. Government must invest a lot more in our public school.
“Education at the basic level particularly and probably up to secondary school level should be not only mandatory but free for all indigenes or citizens across the country.
“Infact, education at that level should be a right or must be a right because for any nation to develop, you have to get the foundation right.
“Education has multiple impacts. When you have people educated, they take care of their health. They can hardly join bandits or Boko Haram and all these evil groups that we have in the country. So it has many positive impacts and therefore we must invest a lot more in our public schools.
“But I also believe that those who invest in private schools are partners in national development and therefore they should also be supported.
“It is not every proprietor of a school that is just looking for money. And even those who are looking for money, is it not a legitimate business. After all, we support banks. What can be more private than banks that are own by individuals.
“So even private schools need the support of the government. Not only for keeping and maintaining the standard but some kind of resources to be made available to private schools just to ensure that they continue on the path of national development.
“Secondly, I have also noticed that there is a good proportion of young girls here. And that also tells me a story that if you want to empower women, you give them education.
“They don’t have to beg anybody to get there once they are educated. They can beat the men by the time they are educated.”
The Senate President who is the chairman of the Governing Council of NILDS explained that “the main objective of the Quiz Competition is to introduce young Nigerians particularly secondary school students, who are the leaders of tomorrow, to the fundamentals of legislative processes and procedures for democratic governance.
“The Nigerian Legislature is no doubt one of the most misunderstood arm of government. Using the instrumentality of the quiz competition, the Institute is gradually changing this narrative by promoting awareness, knowledge and understanding of the history, role and function of the Nigerian legislature.
“To this effect, NILDS is further encouraged to collaborate with research institutes and relevant agencies of government to develop curriculum on Legislative and Democratic studies for inclusion in the civic Education, Social Studies, Government and other curricular for basic as well as Senior Secondary Education to enrich their contents and bridge the knowledge gaps in the legislature.”