By The Gazelle NewsSeptember 21, 2021No Comments4 Mins Read 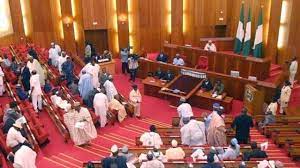 A bill proposing life imprisonment for the offence of kidnapping or any form of abduction, wrongful restraint and confinement on Tuesday passed second reading in the Senate.

The bill sponsored by Senator Ibikunle Amosun (APC, Ogun Central) seeks to, among others, introduce stiffer punishments and punitive measures to combat and prevent kidnapping in Nigeria.

Leading debate on the bill, Senator Amosun observed that kidnapping is a major security challenge confronting Nigeria in recent times.

According to the lawmaker, the light punishment for the offence has continued to make it grow and assume horrendous dimensions with a negative impact on the economy.

“The impact of kidnapping on both economic and daily life has been devastating.

“For many Nigerians, kidnapping is far more devastating than the carnage of Boko Haram in the northeast, or the carnage in the middle belt over land, pasture and water use between farmers and herders.

“In the rich oil south-south, kidnapping is often seem as a manifestation of the insurrection over how oil revenue is distributed.

“Overtime, the pool of potential victims has shockingly been expanded. No, most victims are often poor villagers, sometimes kidnapped indiscriminately, a departure from the targeted kidnapping of wealthy people. They struggle to pay ransoms because of their relative poverty; and this has resulted into many victims being killed in the process”, he said.

Amosun lamented that, “Nigeria has one of the rates of kidnaps for ransom of both locals and foreigners in all of Africa.”

He added, “while the insurgents in the North East now thrive on the proceeds of kidnappings, criminal elements in the South East and South West are also having a field day. In fact, kidnapping has now become a big and lucrative business.”

Similarly, Amosun said that a Vanguard report published online on the July 13, 2021, states that an average of 13 persons were abducted daily in Nigeria in the first half of 2021, bringing to 2,371 the number of reported persons kidnapped in the country within the first six months of the year.

He bemoaned the worrisome development, warning that the trend has the potential of negatively affecting Nigeria’s Foreign Direct Investment.

The lawmaker stated that the bill, therefore, seeks to introduce stiffer punishment for the offence of abduction, wrongful restraint and confinement for ransom.

“This bill also provides more punitive measures for ancillary crimes flowing from the commission of the crime of abduction, like death or grievous harm.

“To achieve the deterrent effect, life imprisonments is proposed for the offence of kidnapping, particularly where death results from the act.

“The law is made stricter by ensuring that recipients of any proceeds of the act of kidnapping are heavily sanctioned with term of imprisonment of up to 30 years”, Amosun said.

The bill, according to him, also proposes to give the Inspector General of Police wider powers to enable adequate policing of the crime of kidnapping.

The Senate President, Ahmad Lawan, referred the bill after it was exhaustively debated, to the Committee on Judiciary, Human Rights and Legal Matters.

The Committee which is chaired by Senator Michael Opeyemi Bamidele was given four weeks to report back to the upper chamber.

Meanwhile, the Senate President on Tuesday referred President Buhari’s request to approve $4.054bn, €710m external borrowing, and $125m grant component captured for projects under the 2018 – 2021 borrowing plan to the Committee on Local and Foreign Debts.

The Committee chaired by Senator Clifford Ordia was given one week to report back to the Senate.

Buhari in a letter dated August 24, 2021, explained that the projects listed in the 2018-2021 Federal Government Borrowing Plan are to be financed through sovereign loans from the World Bank, French Development Agency (AFD), China-Exim Bank, International Fund for Agricultural Development (IFAD), Credit Suisse Group and Standard Chatered/China Export and Credit (SINOSURE) in the total sum of USD4,054,476,863.00; Euro 710,000,000.00 and Grant Component of USD125,000,000.00.

He added that the amount would be used to fund Federal and States Government projects cut across key sectors such as Infrastructure, Health, Agriculture and Food Security, Energy, Education and Human Capital Development and COVID-19 Response efforts.