By The Gazelle NewsJune 14, 2022No Comments3 Mins Read 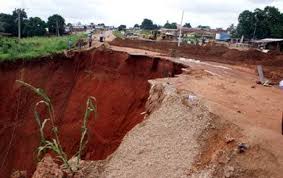 Share
Facebook Twitter LinkedIn Pinterest Email
State governments have been advised to establish Erosion Management Agency in their domain to tackle the menace of erosion.
Speaking at the Valedictory Dinner and Award Night for the Nigeria Erosion and Watershed Management Project (NEWMAP), the National Coordinator of the Project jointly sponsored by the World Bank and the Federal Government in collaboration with 23 State Governments, Dr. Salisu Dahiru said it is time for the states to take their destiny in their hands as the World Bank assisted project is winding up after about 10 years.
Dahiru while revealing that eight of the twenty-three benefiting states have risen up to the challenge of the international monetary organisation exiting from the project, said for the other states not to lose track and from the gains of the project, they should quickly bring together the technical assistance in the form of manpower trained and infrastructure benefited from the project to establish an Erosion Management Agency that would tackle the menace of erosion.
He said: “Out of 23 participating states, 8 states of Enugu, Anambra, Katsina, Kogi, Sokoto, Delta, Edo, Kano, have established Erosion Management Agencies, it is time for others to join the train.”
He added that: “As part of sustainable measures, 8 agencies for Erosion and Watershed Management established to guide and implement future activities on erosion control stormwater management, other states are gearing towards fully establishing respective agencies.”
Dahiru, while stating that NEWMAP has achieved a lot since 2013 when it was established in the country, said at present a Harmonized Guideline for Road Design, Construction and Maintenance has been developed to provide standard practices for road and drainage designs, construction and maintenance.
He disclosed that the guideline was developed in close synergy with the Ministry of Works and identifies causes of soil erosion linked to road construction in the country.
Also speaking at the event, which brought together serving and retired staff of NEWMAP, the Minister of Environment, Mohammed Abdullahi said “way back in 2012, the Federal Ministry of Environment had in partnership with the World Bank designed the Nigeria Erosion and Watershed Management Project, with the aim of reducing vulnerability to gully erosion and other forms of land degradation in targeted watersheds, focussing on reversing and preventing further land degradation, and at the same time enhancing the livelihoods of beneficiary communities.”
He said: “From the exhibitions put up by the various states. I am convinced that the Project has received tremendous achievements in terms of the noble objectives for which the Project was established.”
The Minister who was represented by a Special Assistant, Abdulhadi Abdullahi: “I must reiterate here that the achievements of NEWMAP are in line with the goals of President Buhari Administrations Economic Recovery and Growth Plan (ERGP) and the Next Level vision on sustainable development.
“Further evidences of NEWMAP achievements are dotted all over the 23 states, covering various areas such as gully rehabilitation, restoration of degraded lands, urban stormwater management, climate change adaptation and resilience, water harvesting, climate smart Agriculture; Innovative Technologies/GIS; re-forestation, biodiversity conservation, support to community health care services, job creation, sustainable livelihood initiatives, etc, etc.”
He added: “The impact of NEWMAP has been felt all over the country, including in states that are not participating in the Project, such as Jigawa. NEWMAP has completed 56 gully erosion sites; reclaimed over 23,000 ha of degraded land, number of households that directly benefited from the Project stands at over 25,000, while over 185,000 persons have received Project Advisory training.”