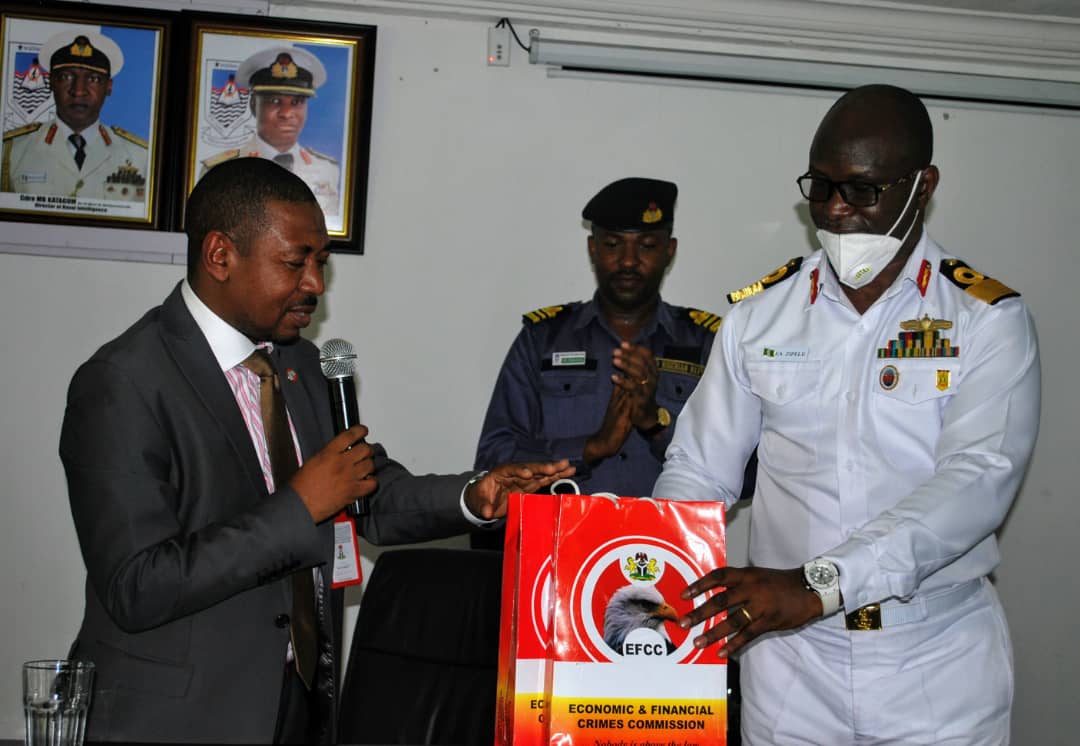 There Is A Paradigm Shift In EFC –  Zonal Commander

He gave the commendation on Thursday, November 4, 2021 at the Nigerian Navy Intelligence School,  Ubima,  Rivers State,  while delivering a lecture on the ” History,  Roles &  Organisation of the EFCC” to trainee officers and ratings of the Navy.

According to him, there is a paradigm shift already in the EFCC and it is meant to strengthen the Commission and the workforce for more effective onslaught against economic and financial crimes.

“There is paradigm shift in EFCC.  Repositioning is taking place and it is good for the nation.  The Executive Chairman, Mr. Abdulrasheed Bawa is working to strengthen  the Commission and its workforce for more effective performance.  Take the   Eagle Eye App for example,   over 15 million downloads have been made for the reporting of all shades of economic and financial crimes.  The app is widely received across the world. Investigations are now proactive rather than reactive.  They are intelligence- driven. The nation is already reaping gains from the radical reforms”, he said.

He charged the Navy to collaborate more with the EFCC, stressing that the task of combating corrupt practices required collaborative approaches and the trainee officers and ratings would be useful in pushing the frontiers of the anti- graft fight.

“Every success of the EFCC in its assigned mandate, is a success of every Nigerian and this is why the Commission is employing collaborative approaches in carrying out its mandate.  As young officers in training, the EFCC is positive that upon your graduation, you will join hands with it in ridding our country of all forms of economic and financial crimes”, he said.

Naibi took the trainee officers and ratings on an excursion drive through the history; roles;   structure, organization and detailed works of the EFCC.  He paid premium attention to the typology of economic and financial crimes being handled by the Commission, with specific reference to extractive industry fraud and Illegal oil bunkering that are rampant in the Niger Delta.  “We are determined to rid our nation of all these crimes”, he said.

Responding, Commandant of the Naval School of Intelligence, Commodore E. A Zipele expressed satisfaction with the lecture, describing it as “incisive, thought- provoking and well- delivered”.  He reiterated the need for more collaboration between the two agencies, saying that “no agency can work alone without relating with others”.

Buhari To Present 2023 Budget To N’Assembly On Friday

Kachikwu’s Car Was Impounded In US For Emission Concerns; He Didn’t Smuggle Stolen Car Into US; Read His Full Response Here