By The Gazelle NewsNovember 26, 2022No Comments5 Mins Read 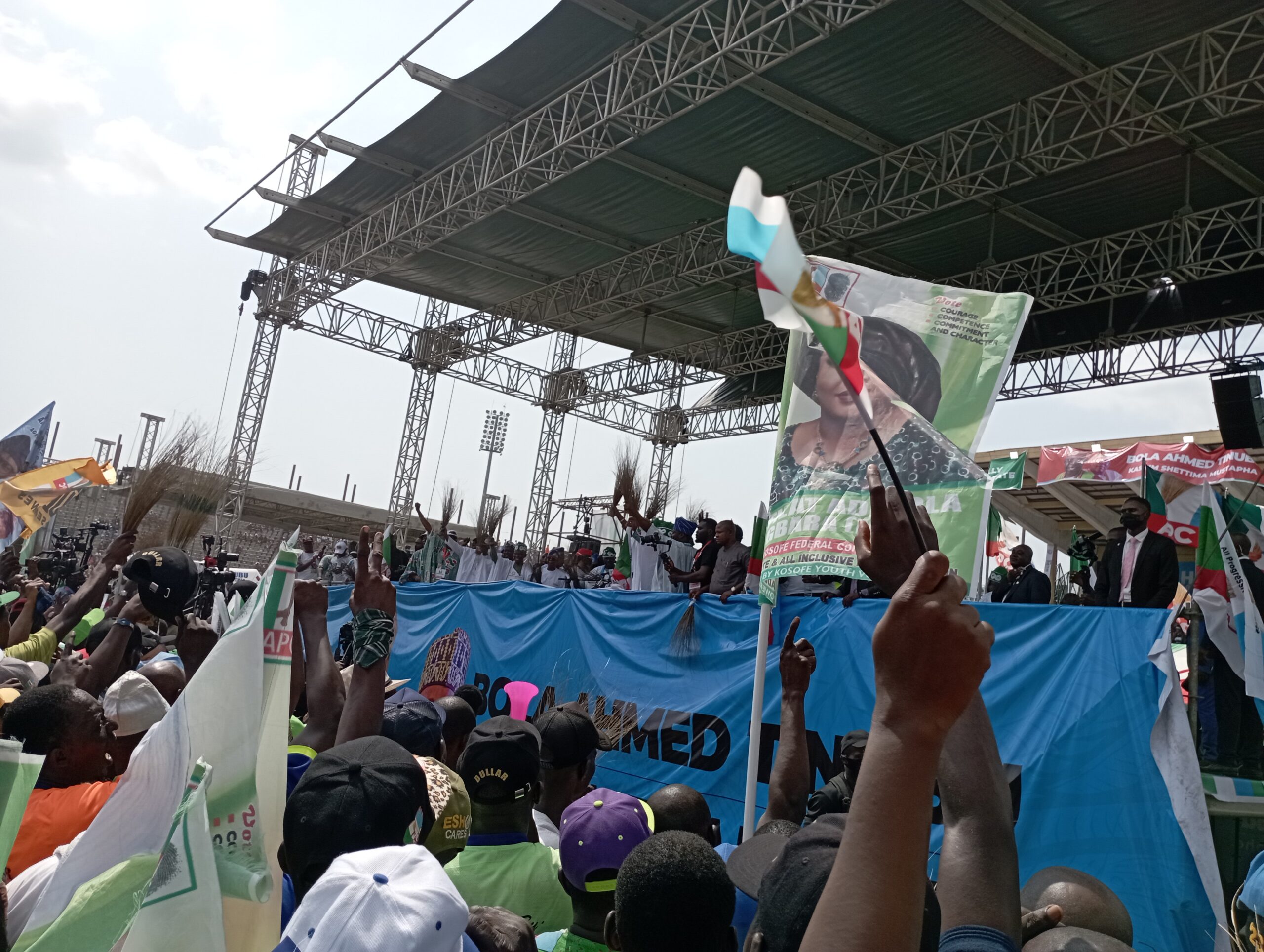 Surulere – the Lagos city that hosted the first All Progressives Congress (APC) convention after the party was formed in 2014 – became a beehive of political carnival on Saturday, 26 November, 2022.

A mammoth crowd thronged the main bowl of the Teslim Balogun Stadium in Surulere, as the ruling party returned to the city for its inaugural 2023 presidential rally in the Southwest region.

Clad in various shades of APC-branded vests, caps and Ankara brocade, a mass of the party’s supporters, who filled the 24,000-capacity stadium to the brim, defied the searing heat from the sun to receive the APC presidential candidate, Asiwaju Bola Ahmed Tinubu, his running mate, Sen. Kashim Shettima, members of the party’s National Working Committee (NWC) and the Presidential Campaign Council (PCC) team.

At 12:45, Tinubu’s motorcade made a grand entry into the venue, moving the crowd into a spontaneous excitement. The APC presidential candidate arrived in company of Governor Babajide Sanwo-Olu, Minister for Works and Housing, Babatunde Fashola, and members of Progressive Governors’ Forum led by their chairman, Gov. Abubakar Atiku Bagudu of Kebbi State.

The huge turnout at the rally again confirmed Tinubu’s popularity at his political base. The APC presidential candidate hails from Lagos and was a two-term Governor of the State.

Sanwo-Olu opened the floor with his short remarks, thanking Tinubu for laying the foundation for the physical and socio-economic growth being witnessed in Lagos since 1999.

The Governor, who described the APC presidential standard bearer as “architect of modern Lagos”, said Tinubu’s vision, character and tenacity stood him out among presidential contenders, urging Lagosians to elect the candidate with unprecedented number of votes at the polls.

Sanwo-Olu said: “Tinubu is the builder of the modern Lagos we are all enjoying today. For implementing his vision through character and tenacity, and pushing his ideas to what we can physically see, our candidate is the best choice for the president.

“Aside being a visionary leader, Tinubu has also been an advocate of unity and a figure who has stood firm in support of national cohesion. We are all witnesses to all outstanding achievements to his name. His reputation stands tall among his peers And he is the right man for the job.”

Tinubu took to the podium to share message of “Renewed Hope” with the mass of young people at the rally. He said his administration’s priorities would focus on improving human capital development and harnessing energy of the youth through job creation to accelerate economic growth.

His capacity to lead the country, the APC presidential candidate said is not in doubt, noting that Lagos’ growth trajectory from a State in deficit to one of the six largest economies in Africa best demonstrated his ability to drive the needed change to put the country on the path of prosperity.

When elected, Tinubu said he would do his best to change the country’s fortunes, but noted the task would not be easy at the start.

He said: “I stand before you all with a solemn promise that when we are elected next year, we will continue and build on the progressive path laid forth by our party since 2015. We have a clear agenda for the future of the country and with your support, we will work to achieve a better future for you and your family.

“Nobody will be forgotten when we roll out our development plans. We have great plans for our youths in education and employment. You will not be forgotten. Economic growth is one of our biggest priorities. We will do our best to solve the contemporary challenges facing us, but it will not be easy at the start.”

Tinubu, again, took a swipe at Peoples Democratic Party (PDP) and its candidate, Alhaji Atiku Abubakar, calling on the electorate to use their votes to retire him finally. The APC presidential candidate said PDP spent 15 years making excuses and forgot the mandate given them to better the lives of Nigerians in the era of boom.

Under the PDP, Tinubu said major infrastructure projects were left to rot with no plan for their rehabilitation, including Lagos-Badagry Highway.

“Rejecting Atiku with your votes and retiring him will be the final step to take in burying PDP for life,” Tinubu said.

The APC National Leader passed a vote of confidence on Sanwo-Olu and his deputy, Dr. Obafemi Hamzat, saying the Governor had become a symbol of good governance.

Tinubu said PDP would repeat another outing of failure in Lagos gubernatorial election, stressing that the opposition party did not have enough strength to stop Sanwo-Olu’s re-election

The PCC Director-General and Governor of Plateau State, Simon Lalong, described Tinubu as a “consummate manager of people and resources” with capacity to change difficult situations.

Lalong said Tinubu’s greatest success as former Lagos governor was his ability to groom brilliant successors that expanded his ideas to the next level.

Speaker, House of Representatives, Rt. Hon. Femi Gbajabiamila, said Tinubu’s winning the party presidential ticket took him out as the most investigated politician in the Fourth Republic.

Despite series of wild allegations being bandied against Tinubu, the Speaker said none had been proven to be true. The APC presidential candidate, Gbajabiamila said, would win the election with convincing margins.

He said: “This is not the main rally for Lagos. We are energising the base with this large turnout witnessed here today. When the main campaign is held, it will be the double of the crowd we see here today.”