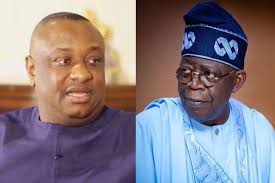 Tinubu Forfeited $460,000 To US Government Over Tax Matters Not Drug Crime – Keyamo

Posted By: The Gazelle NewsIn: News, PoliticsNo Comments
Print Email
Festus Keyamo, Director of Public Affairs of the All Progressives Congress (APC) presidential campaign council on Wednesday night, 9 November, 2022, provided more clarity on the alleged drug case of Asiwaju Bola Ahmed Tinubu in United States.
The APC Presidential Candidate has been dogged with allegations of money laundering and being a drug trafficker by traducers and opposition politicians since 2003 when he contested for a second term as governor of Lagos. Same allegations have been recycled at every election circle ever since.
Speaking on the new wave of same allegations on Channels TV on Wednesday night, 9 November, 2022, with Seun Okinbaloye, Keyamo dismissed the notion of any fresh discovery or new material facts adding that parading certified true copies of court documents does not confer freshness on documents that have been in circulation for over 20 years.
“Let me first make it clear that there is nothing new in what they call certified true copies since it appears that is what Atiku Abubakar and his people went to do in America under the guise of meeting US government officials. Court documents are public documents anyone can get and once anyone asks for a true copies of such documents the stamp and date of the day it was given out will be put to certify them as true copies of an existing document,” said Keyamo.
On the substantive issue of the case, Keyamo said there was no criminal charge, no trial, indictment and no conviction of Tinubu anywhere in the US. The APC campaign spokesman said the $460,000 that was taken by the US Internal Revenue Service was not criminal forfeiture but tax on proceeds of legitimate investments paid to Tinubu’s bank account at Heritage Bank in US.
On Tuesday, the social media was awash with what appeared to be certified true copies of a settlement order issued by a US court domiciled at the northern district of Illinois regarding forfeiture of funds in some bank accounts linked to someone named “Bola Tinubu”.
According to the court papers that was promoted on social media by Paul Ibe, Media Adviser to Atiku Abubakar the Peoples Democratic Party Presidential Candidate, there was probable cause to believe that the funds in bank accounts linked to the named Tinubu were proceeds of narcotics trafficking.
The court ruled that the sum of $460,000 from the money in one of the accounts be forfeited to the US government.
The court document also shows that the case was heard in the US in 1992 and was initiated by Internal Revenue Service as purely tax matters over about $2million dollars deposit in one of Tinubu’s bank accounts and other bank transactions.
Given further clarification on the matter, Keyamo said the former Lagos Governor became a subject of interest because he used house address of two people who were known to him then that were under criminal investigation adding that the IRS prosecutor only did what all prosecutors do when they are investigating cases by casting their net wide open.
“These processes are mere presumptions. They found money in his (Tinubu) accounts and they said he needed to come forward to explain the source. I am a special prosecutor of more than 10 years standing and one of the best in Nigeria. This is what we do in matters like this and there is nothing special about it,” he said.
“In that affidavit of Kevin Moss, they said they interviewed Mobil and Mobil said this man is a treasurer in Mobil. Mobil said the funds are not for them.
“They confirmed his status not as a criminal but as a respected employee of Mobil. It is in that affidavit.
“After all the rigamarole trying to find out whether the accounts where the money came from are linked to drugs, they came to the conclusion that the deposits he made — what these bankers called investments — they said he had not paid tax on these interests. That is all.
“Look at paragraph 38. They said it is tax. They took what belonged to them. All they did after all their rigmarole when they could not find any proceed of crime or drug money was to say he didn’t pay the right tax on his investment proceeds. Tax is their oil in US and Europe. They don’t joke with tax. They just took $460,000 as the amount of tax he should have paid and gave him back his remaining money. In fact they begged him to indemnify them. They don’t want him to come back to file charges against them. America will not beg a criminal to indemnify them not to file charges,” Keyamo posited.