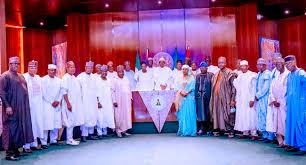 Share
Facebook Twitter LinkedIn Pinterest Email
The Presidential Candidate of the All Progressives Congress, (APC ) Asiwaju Ahmed Bola Tinubu met with the Presidential Campaign Council in Abuja on Saturday, 13 August, 2022.
The Presidential Candidate also held a meeting with the council with the Northern State Assembly Speakers and party stakeholders.
Similarly, The Plateau State Governor and Director General APC Presidential Campaign Council Simon Bako Lalong was at the Headquarters of the Tinubu Campaign Office to inspect the facility and meet some of the staff.
Lalong was received by the Secretary of the APC Presidential Campaign Council Hon. James Faleke and Director of Administration Hadiza Bala Usman.
He was taken round the building and also ushered into his office.
Thereafter, he welcomed the APC Presidential Candidate Asiwaju Bola Tinubu who arrived the office for the meeting.
Asiwaju Bola Tinubu, Governor Lalong and Speaker House of Representatives, Femi Gbajabiamila also held another meeting with Speakers of State Houses of Assembly.
However, the Speaker, Nasarawa State House of Assembly Ibrahim Balarabe Abdullahi in a brief reaction after the meeting, said that APC’s victory in the future elections is assured.
He enjoined Nigerians to have faith and confidence in the ability and capacity of the APC Presidential flagbearer considering his experience and tract records in the past.