Tinubu Thanks APC Delegates, Buhari, Party Leaders, Says ‘We Must Keep PDP Out Of Power’

By The Gazelle NewsJune 8, 2022No Comments4 Mins Read 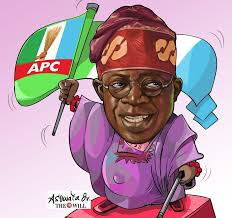 Share
Facebook Twitter LinkedIn Pinterest Email
All Progressives Congress (APC) Presidential Candidate, Asiwaju Bola Ahmed Tinubu has expressed his gratitude to the delegates of the party, President Muhammadu Buhari and other leaders for his victory as the standard  bearer of the party in the next presidential election.
Tinubu polled 1,271 votes to clinch the Party’s nomination ahead of his closest rival, Rotimi Amaechi, former Minister of Transportation who got 316 votes. Vice President Yemi Osinbajo  polled 235 votes, while  Senate President, Dr. Ahmad Lawan got 152 votes. Kogi State Governor, Yahaya Bello got 47 delegates votes.
Kebbi State Governor, Atiku Bagudu who was the Chairman of the Convention’s Election Management Committee declared Tinubu winner of the presidential nomination primary.
Tinubu in his acceptance speech spoke on the journey ahead of the party to victory in the general elections and noted that the party must work to ensure PDP does not return to power after 16 years of colossal failure.
“They ruined our economy. They left abandoned projects. How many abandoned projects did they leave behind? We must keep the key of our treasury away from them. PDP must not be allowed to return back to power.”
Tinubu thanked President Muhammadu Buhari, National Chairman, Senator Abdullahi Adamu, Wife of President, Aisha Buhari, Speaker of House of Representatives, Femi Gbajabiamila, APC Governors, members of National Assembly for their support while he also expressed his profound gratitude to his co-contestants and the aspirants who stepped down for him for the victory.
“I specially thank my fellow contestants who stepped down for me. You did so because you believe in my brain and that does not in any way diminish you.”
In the speech, he addressed the economic, social, security and political challenges facing the country.
He promised to provide the right leadership to tackle them headlong to make the country prosperous, if elected next February.
The APC Presidential candidate said he has the brain and the know-how to turn the country around,  adding that he will set up a competent team to help him make the country better.
He bemoaned the fate of the country for being a consuming nation and one that uses automobiles and other consumer goods that it can not produce.
“We use cars. We can not even produce their brake pads,” he lamented.
As President of Nigeria, Tinubu promised his administration will dredge the Calabar Port to allow bigger ships to come in and build a productive economy where manufacturing and local production of goods and services will be the bedrock of economy.
Asiwaju Tinubu had special appreciation for members of Nigeria’s armed forces and other security agencies who work day and night away from their families to keep the country save.
“I want to thank our men and women in uniform who stay away from their families to keep us safe. We say thank you,” Tinubu said.
On those who cause ethnic and religious strife that have led to the death of many innocent Nigerians, and spreading hatred and division in the country, Tinubu told the delegates and supporters to tell them when they return home to stop.
“Tell Nigerians that we are not the barbaric people they think we are. Religion is mostly adopted by birth and we continue in them. The life you take, you cannot bring back. The hate you spill cannot cure your hunger.
We are human beings and we must live together. We must have tolerance and love for each other.”
At the end of his speech which was largely extempore, President Buhari, National Chairman of APC, Governors and other leaders joined Tinubu and his wife on stage to present the party flag to him as the duly elected Presidential candidate.